This year was another successful year for FAN EXPO Canada. The Metro Toronto Convention Center was packed with families, fans, and of course a diverse number of cosplayers from different genres, of both western and asian origins.

The merchandising stalls are filled with patrons browsing for collectibles, costumes, and decorations such as paintings, art sketches, posters of comic characters of all sorts. The popular Funko Pop figures were also abundant and were sold by different merchandisers inside the convention building.

Fan Expo is not complete without the famous celebrities and artists from both film, animation and gaming industries, attending the event to meet and greet their fans, who have travelled for long hours and stood waiting in line just to see them. Some fans took with them into the event many items, from shirts, jackets, caps and even a large hand drawn painting for example which a hardcore D.Va fan brought with him to be signed by Charlet Chung, the voice actor for the extremely cute yet skilled Overwatch MEKA Pilot, the Pro Gamer Hana Song a.k.a. D.Va. 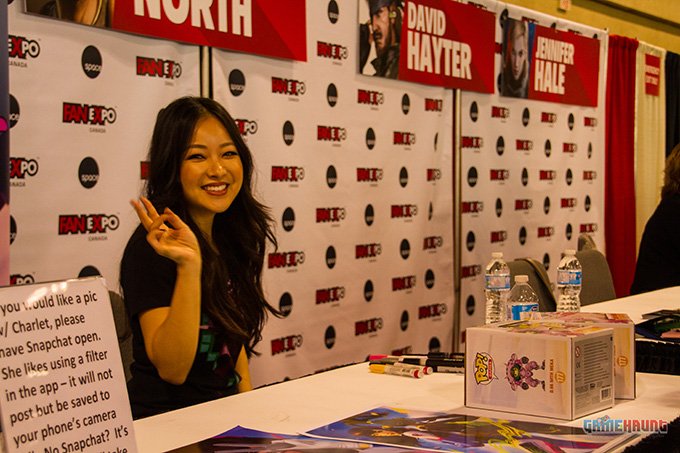 The most popular among the celebrities that came into the event was of course again Norman Reedus, he is well recognized to be the badass zombie killing machine in the Walking Dead television series. We also have Tim Curry who was well known from his iconic role of the horrifying evil clown Pennywise in Stephen King’s IT, the demon Darkness in Legend and he was the voice of the Joker before they gave the role to Mark Hamill, who is known for his star role as Luke Skywalker in the Star Wars Saga. Fans have paid large sums of money just to see both celebrities and have their photos taken with them and have a brief chance of speaking with them in person in front of other fans and visitors during the celebrity photo ops.

Cosplayers were all over the convention grounds both inside and outside. From amateurs to professional cosplayers, every one of them were happy to entertain and chat with the visitors especially the little children that came with their parents. The joy and the smiling faces of young visitors is a very wonderful thing to see while they look or take a photo with their favorite comic book hero or anime character.

Star Wars fans get together during the event and while some of them are not dressed as Rebels, Storm Troopers, or their favorite Jedi and Sith characters they still came to support their fellow fans and took photos around the Star Wars Exhibits and displays, but most hardcore fans just talked about anything that is about Star Wars related stuff. Visitors were also delighted to see an actual Storm Trooper March, which was consisted of fans who volunteered to perform was an amazing sight to behold. 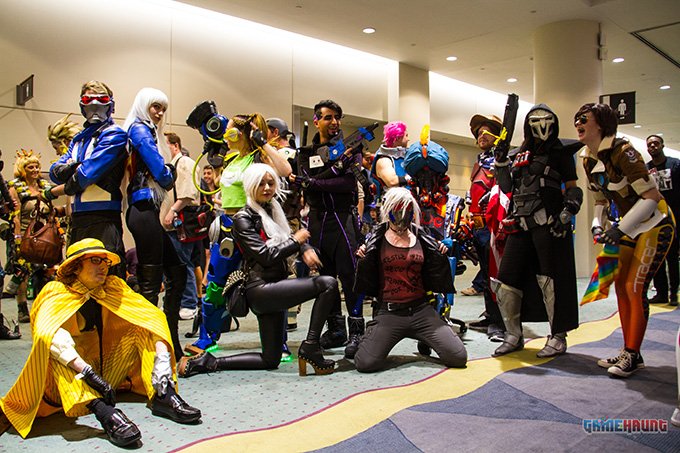 Gaming booths that are present within the event showcased their big upcoming titles and gave the visitors a chance to try out their games.

While some booths are focused on gaming, there are others that displayed tech gadgets and peripherals for both gaming and casual everyday use like advanced polaroid cameras, headsets, mice, ultrawide 4K monitors and a whole lot more to list.

Playstation booth allowed the convention attendees to get their hands-on experience with their exclusive game – Knack 2. The role-playing game Ni no Kuni 2 was also available to play, which is expected to be released at the beginning of 2018.

Xbox booths let the visitors try out Assassin’s Creed: Origins, the latest installment in the series and some of their well known exclusive titles like Forza Horizon 3 and Halo 5: Guardians. 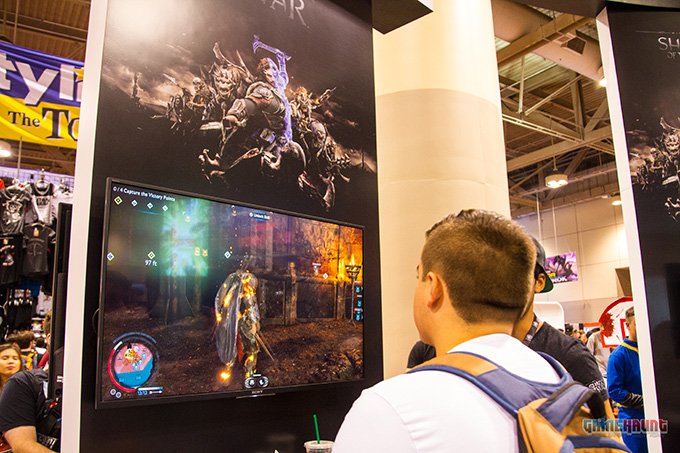 Middle-Earth: Shadow of War was the highlight game exhibited by the Warner Brothers Game booth through the use of the Xbox System. Both fans and new players to the game were given a chance to play as Talion the main protagonist of the game. The game begins during a siege on one of Sauron’s champions keep which is part of the campaign, in this playthrough experience the visitor have the task of taking over the keep and  using a multitude of new powers Talion has in possession and his very own champion’s army which will fight alongside him in the battlefield that he acquired to stop Sauron from taking over Middle-Earth. Defeating one of Sauron’s champion reduces his influence while increasing Talions. The fresh new experience given off by the game is due to the game’s standout feature, the “Nemesis System”.

There is a small photo booth where the visitors can get their photos taken and earning a chance to win any of the two available special versions of the game at the same time. A must have game for Lord of the Rings fans. They also have the Lego games so that the children and their parents could play together and enjoy.

Nintendo’s booth was strongly focused on their Switch System and their latest Mario game, Mario Odyssey which have received 3 awards during the recently concluded E3 this year for best of show, best console game and best action/adventure game. They also held a friendly competitive match of ARMS on their gaming arena where visitors challenged each other in matches and the winner receives a prize gift from Nintendo. 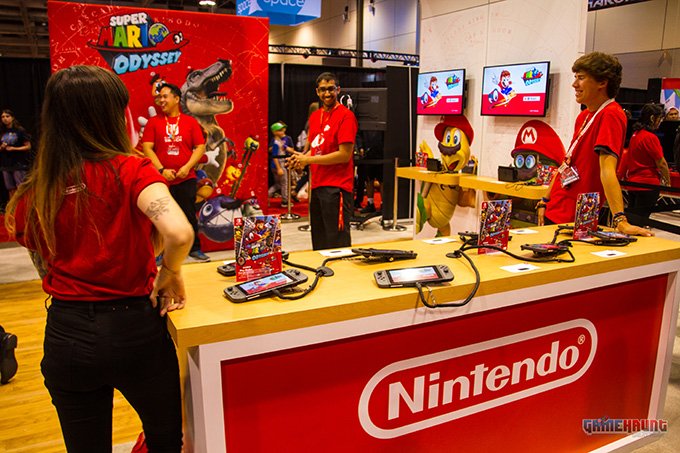 Tabletop games were also present and were held in a different room within the same area as the gaming booths. In the same room people get to meet both local and foreign artist displaying their works and letting the visitors purchase their art or books and having them signed by the artists themselves, talking with the artists inside this room is free and you won’t have to pay unless you are buying any of their works.

A small area was designated for a PC and laptop LAN party where young teens and adults played a game of Tom Clancy’s Rainbow Six: Siege and the all time favorite game of FPS fans, Counter-Strike.

A beautiful display was built for Shuyan Saga, a video game based from a graphic novel, where the player is referred to as the reader. The game is rich in majestic Chinese culture, beautiful music and life lessons which the reader can relate on and lots of kung fu action. It gives the reader a chance to enjoy reading the story while doing combat in 3D which makes the novel come to life. We also had the opportunity to have a quick chat with Kristin Kreuk at FAN EXPO Canada to talk about her role in a recently launched game based on a graphic novel series – Shuyan Saga. You can watch the video on our Youtube channel. 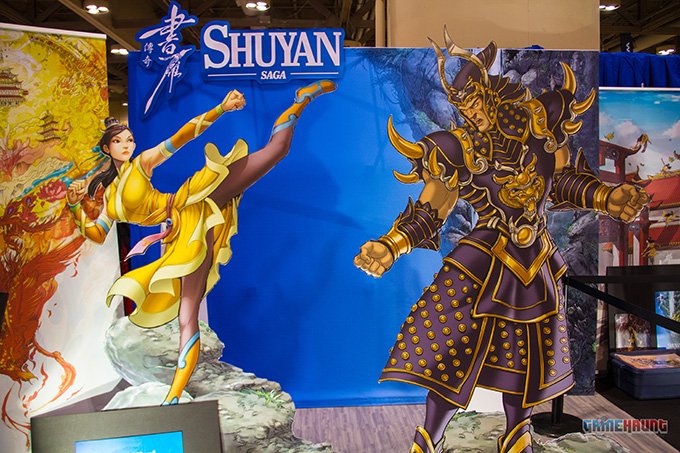 A school bus was transformed into a frightening horror theater to promote New Line Cinema’s latest adaptation of Stephen King’s IT movie where the helpless visitor get to experience the terror of encountering the terrifying evil clown Pennywise. Visitors enter a dark corridor which which slowly begins to be filled with smoke which transitions into mist and rain falling, then warm flame airs which are almost like steam come popping out from all directions. As soon as the corridor door opens the visitors are shown a video image where it represents their days as a school kid boarding a school bus.During this experience the visitors have to sit in swivel chairs with strap vests for safety. And for the last touch everyone puts on their VR Headsets and the story begins. The stories journey takes the visitors into Derry, Maine where the story of IT takes place.

A mini laser tag arena was even setup inside for the Star Trek series where visitors formed teams and shot each other in a deathmatch style gameplay. On the other side of the arena was a prop display for the upcoming Marvel movie, THOR RAGNAROK. The display showed off the replicas of the weapons and armors used in the movie by the actors such as Thor’s armor, helm and sword;The Hulk’s axe and hammer; Loki’s armor, and for Hera’s debut in the movie they have included her armor and headdress into the display. 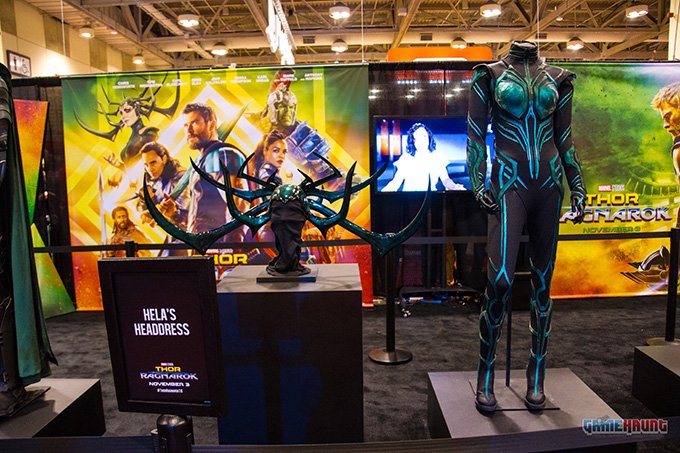 A handful of popular comic artists were on site during the event. Starting with Phil Jimenez, who was known for his work in Wonder Woman from 2000 to 2003 as a writer and artist. We also have Jim Lee, an American comic book artist of Korean descent, he started as an artist for Marvel Comics and was known for his work on The Uncanny X-Men, which still remains as the best-selling comic book of all time. Tony Moore was also in FAN EXPO Canada, another American comic book artist known to work on genre pieces mostly in horror and science-fiction, there is a high possibility that any walking dead fans should know about him since it is one of his well known works.

Popular cosplay models graced the convention with their beauty and skill in cosplaying. It is a well-known fact that Jessica Nigri, a New Zealand-American, is the number one cosplayer in the world, and everyone who saw her was stunned and amazed, she is a real head turner. Next on our cosplayers popular list is Leeanna Vamp, who is a host and cosplayer, she creates and produces her own projects, and she is known to be the “Goddess of Halloween” and “Queen of the Nerds”. And finally we have Missy Mayhem, she is a professional internet personality and as the youths call it this days a Viral Super Star, her most popular appearance was cosplaying Dragon Ball Z’s Son Goku when he transformed into a super saiyan for the very first time after krillin’s death while fighting against Freeza on planet Namek. 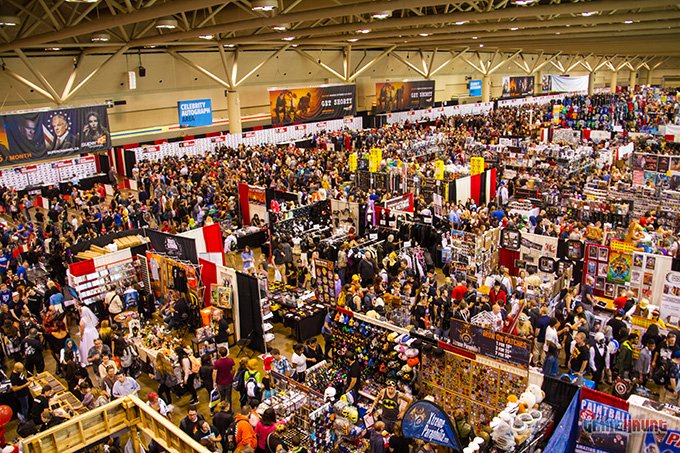 Let’s not forget about our anime artists which made it this year to the event and some who are returning, to be straight to the point this are their dub voice actors. Bryce Papenbrook was one of the few noticeable anime voice actors who are present during the event, he is known to voice characters such as Rin Okumura from Blue Exorcist, Kirito from Sword Art Online, Eren Jaeger from Attack on Titan, and yes he voiced Red in Pokemon Origins too!

And still standing as the mature Son Goku’s voice in the Dragon Ball franchise is Sean Schemmel, who for many years have given his voice to our beloved super saiyan. He also gave his voice to the Black Swordsman Guts from the Berserk series.

Check out our 4-minute video below covering the whole weekend of the expo. All our photos from FAN EXPO Canada are posted on our Facebook album. To wrap this article up, Charlet Chung, the voice actor behind D.Va of Overwatch has a quick message for our readers from the Philippines which we posted on our Facebook page. We hope to see all these amazing people again next year!