Super Mario has ruled over millions of hearts for a long time. It used to be the best source of entertainment while there were no modern video game consoles. Today, the gaming technology is much improved and people can play video games on a wide range of devices. The crossover of Nintendo’s Mario and Ubisoft’s Raving Rabbids seems a bit surprising in such conditions. However, it has happened and consequently we have got a new amazing game, known as Mario + Rabbids: Kingdome Battle. Let’s find out what special this turn-based tactical RPG has for all the Super Mario and Raving Rabbids fans.

Yes, it is something new:

The storyline begins with a real world experiment of a girl. She tries to develop a headset, which can merge two different entities into a single entity. She is desperately trying to remove the bugs from the system Beeep-0 (her robotic assistance) is helping her. She moves out just for a few seconds and the Rabbids teleport in through a washing machine teleporter. The teleporting helmet later merges Rabbids with a wide range of items and consequently these creatures find themselves in the Mushroom Kingdom’s world. Now things are messing up and getting worse and our hero Mario along with Rabbid Peach and Rabbid Luigi are on a mission to make things right with the help of some new allies and Beep-0. That’s how the game starts and it promises to be an amazing journey of the in-game world.

Of course, it is a unique game and offers everything to entertain you, but still it seems quite inspired from the Super Mario Formula. This game takes you through four in-game worlds. All the four worlds are further divided into chapters. You will get a certain number of maps in each chapter and that would remind you different stages of the Super Mario game. The progress between each stage seems like wandering through a world map rife in the quest of solutions for the secrets and puzzles. It is possible that you can explore some eight red coins and hidden coins to collect and increase your coin count. There are some destructive weapons, power orbs, and challenge stages to complete the chosen character’s skill trees. Of course, improving the powers of the characters would be an amazing experience, especially when Beep-0 will gain some new powers during the gameplay.

Of course, it is a challenging role-playing game, but not as difficult as other RPGs. It should be your first choice, if you have never played an RPG before. It helps you in planning strategies and progressing ahead for a better success. You can battle with only three characters at a time. There should be Mario, Rabbid Luigi, and Rabbid Peach.

This game does not offer extra weapons, extra party member, melee weapons, and the skill tree during the initial stage. Defeating the initial enemies would not be a tough task for you. You can win the battles with a few associates and with the help of normal weapons. The main game starts as you defeat the first Mini-Boss. Now Luigi will be in your crew and all the characters in your party will get a second melee attack. Now you can improve the skills and powers of the characters by playing further and winning the battles. 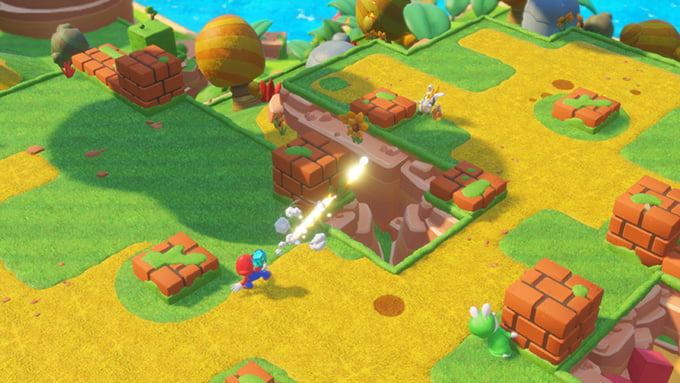 The graphics and sounds

The gameplay is quite interesting and it becomes more entertaining with the help of top quality presentation of the objects. The game looks simply incredible because of the colors used by the developers. The Mushroom Kingdom is a colorful place and Nintendo Switch seems the main source of its beauty. Do not worry about playing this game on the docked mode or in the handheld mode because the graphical presentation will remain awesome in all the modes. Switch would be the best platform to try this game, if you want to play it on a handheld device.

The background music of the game is also very engaging. It is the music that offers a necessary boost to improve the performance. The developers have used a wide variety of sounds for different situations. There are different tunes used in every chapter and all of those tunes feel pretty impressive. The music does not let you feel bored and that’s why you wish to keep going.

Features that turn it into an interesting game

Legend of Zelda: Breath of the Wild Review

Even though the gameplay is quite intuitive, the game seems quite challenging and creative at different stages. It is not one of those games in which you are done after defeating the enemies. Once you are done with the rabbids in a small area, get ready to combat with many others in other regions of the in-game universe. The powers and movements of the characters increase as the game progresses and you must know the available powers and limitations. The rabbids can easily defeat your protagonist, if you try any insecure move to take over the game. 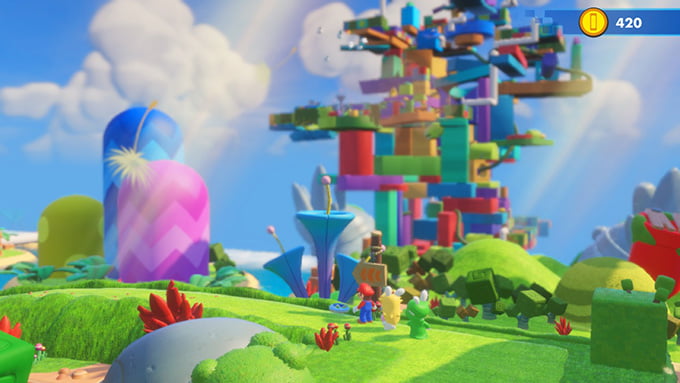 MARIO + RABBIDS: KINGDOM BATTLE is an entertaining and challenging game. It does not allow you to take a rest after completing the running quests because many other objectives remain pending during the gameplay. You need to learn how to switch between the characters to use some of them as bait and then attack the enemies. This role-playing game is simply amazing and you would certainly like to play it time and again to finish the current level and level up as soon as possible.

Nintendo Switch and Ubisoft have come together to produce something unique and very entertaining. MARIO + RABBIDS: KINGDOM BATTLE is a product of their union and it seems quite an amazing game for every gamer. You don’t need to be an adult or a very well experienced RPG player to play this game. Its intuitive gameplay first makes things easier and then challenging. It is good to learn how to plan tactics to win a game, which constantly presents new threats with so much thrill and adventure.