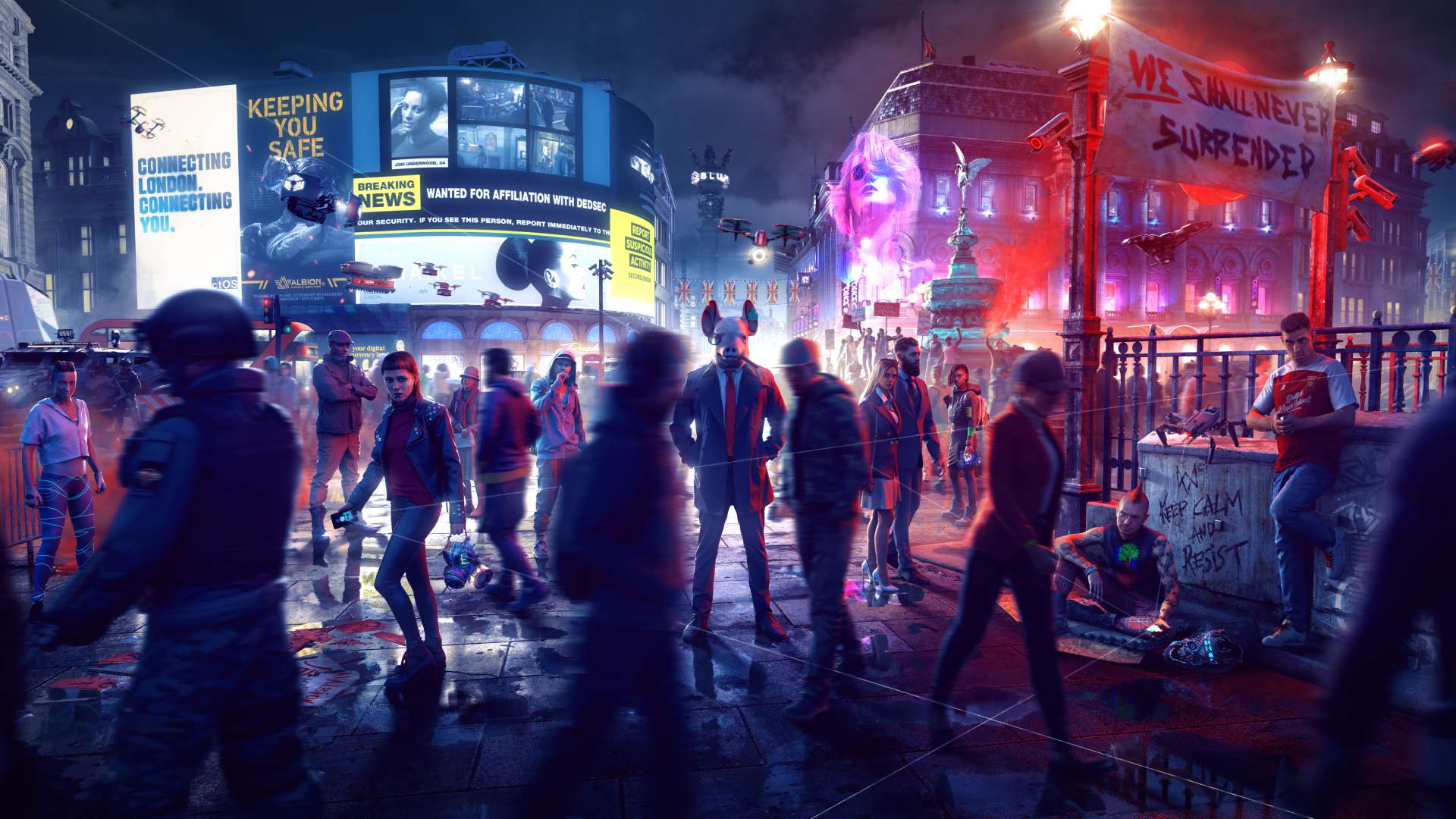 The third installment of Ubisoft’s Watch Dogs series, set in a fictionalized re-imagination of dystopian London. Watch Dogs Legion follows the hacktivist group DedSec and the events after the previous title. This time, DedSec has been framed for the bombing of London and seeks to clear their name. The British government seeks assistance on restoring order with private military company Albion. Albion then takes over as law enforcement of the city.

Using advanced technology to survey and control the streets. This iron grip of authority effectively causes social and political unrest in all who live in London. Your mission is to retake London from this oppressive regime.

Watch Dogs Legion is an ambitious game as it explores a unique footing in comparison to its predecessors. Unlike most games, Watch Dogs Legion does not follow and control a single protagonist. The game takes the quote “anyone can be a hero” quite literally. You recruit NPCs to build your own team on liberating London and slowly rally people to your cause. The process of building your own team is really fun and opens up a lot of possibilities.

The NPC-recruits are provided with a high variety based from background template. Each character can have its own perks making characters feel startlingly original. The more you open up the world, the more you have access to recruits with very specific abilities and backgrounds.

Since the game does not follow a single protagonist, this gives us freedom on plot progression. This opens up on approaching scenarios through different means. You may find yourself getting invested in the moment to moment plot and progression of the different characters. The variety of characters make us of different resources. This means that there are multiple ways to finishing a mission. For example, a character with a construction worker background can utilize a cargo drone which basically is a flying platform.

You can either go about a scenario through stealth, or rally others to fight or use their drones and gadgets, or you can come in crashing through the gate with guns blazing. You’ll find these parts most entertaining.

Watch Dogs Legion also improves on lending weight to NPCs and the game creates an expectation of playing the good guy. While the game does not really punish you for going wild but you can feel the world’s outlook toward you with these acts. The game reinforces you to act ethically despite the chaos you can bring about.

Overall gameplay feels similar to those who have played the first to games, however, you can feel how they improved upon all the things they had previously implemented. Environmental and tech puzzles, remotely opening doors, hacking security cameras, and using drones and spiderbots are some of the things that you may find polished aspects on the game.

Scenarios and level design are pretty impressive. These vary from using simple techniques to utilizing a whole arsenal of techniques. Some puzzles are a bit repetitive but there are fun mini-games spread across the world. The games’ difficulty may come across as fairly easy, depending on who’s playing. There are times if you don’t pay attention things can go south and you may need to find a different way to finish an objective. The enemy AI can be a bit tough and relentless compared to the previous games. Overall it feels very balanced in terms of fun and challenging.

Cosmetics and customization are also fun aspects of the game. You can change how your character looks based on what you can pick up around or things you can buy within the game. The cosmetic variation is enough to add that playful personality to the characters. The characters are also given a universal tech tree that unlocks perks for characters. Tech tree points can be earned by going about the world. Points can be found as simple as going down to an alleyway or as complicated as using various techniques. Some of them are hidden like those collectible trophies in other open-world games.

Another thing that Watch Dogs: Legion brings to the table is that it also steps it up a notch on difficulty as it offers a “hardcore” or “permadeath” mode. Normally, the default mode has a cooldown period for characters after they fail or die in a mission. The narrative would say that they were hospitalized or arrested for a certain time. However, the “hardcore” mode raises up the stakes by permanently losing these characters when failing or dying on a mission. This means that characters with rare perks or traits can be lost for good.

The game’s storyline and progression evolve quite nicely. Since you are in charge of multiple characters it doesn’t really follow a linear plotline.T the series of events that take place can get you invested on your own characters. You can also see how your organization grows from your ragtag team of individuals into a cohesive team.

The plot moves forward supported by its impressive dialogue. You can also see some banter and interactions between other members and experience it as if they are the written characters you meet along the way like other adventure or role-playing games.

Watch Dogs: Legion is of course as ambitious as it is, it not without flaws. You may find stuttering framerates is normally an issue within the game, though distracting, it isn’t that much that makes you quit the game. Glitches such as floating characters or items are apparent in modern video games. Future patches can work on the flaws and overall it doesn’t stop the allure and the fun unique interactions the game brings.

Overall, Watch Dogs: Legion is a refined realization of the hacker fantasy that the first title wanted to capture. The unique interactions between the characters and their world are more than enough to get you hooked in the game. The world of Watch Dogs: Legion doesn’t take itself too seriously. It also brings forth a largely entertaining package of scenarios that are fantastically designed and along with a fun and balanced gameplay and narrative.

Watch Dogs Legion Review
Conclusion
Watch Dogs: Legion is a refined realization of the hacker fantasy that the first title wanted to capture.
Positive
Open World is amazing, especially if you've ever traveled to London yourself. You could easily lose a few hours
Negative
Story is underbaked and tonally inconsistent · Larger than life villain don't have enough room to shine
4.5
GAMEHAUNT SCORE
Where to Buy
Epic Games