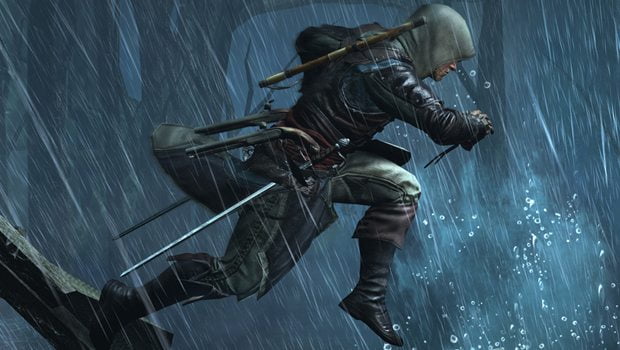 We’re finally back working for Abstergo’s Animus project as a random employee-researcher with the ability to do some hacking in their office through solving some mini puzzles.This time, Abstergo’s research is more about pirates and that’s where the story of Assassin’s Creed: Black Flag revolves. The main protagonist of the plot was Edward Kenway, a privateer-turned-pirate who is also the father of Haytham Kenway. Ubisoft has made a lot of improvements from what most of the fans loved since the previous game in the franchise and one of the major highlights was the naval combat. The Naval combat in Black Flag is one of the best gaming experience this year specially for the current-gen. You’ll spend a lot of your time in the game on the sea and your ship – the Jackdaw. As you go along with the Jackdaw in your adventure, you’ll encounter small to bigger ships that you can either sink and get the half of its cargo which can be used for your ship upgrades or board it to get all of the cargo. Captain Edward now have several options to start a naval battle; mortars can be used to to have a ranged strike, cripple the enemy ships through chase cannon and start ramming them or use the usual broadside cannon that was first seen in Assassin’s Creed III.

By boarding a ship it offers a lot of choices on how to face every encounter: you can use the ship’s swivel guns to hit the enemies on the enemy ship, use the swinging rope and air assassinate the enemies, have a direct assassination or engage in an open fight. Bigger ships will also require the Edward to kill their captain/s and even destroy their flags. The full upgrade of the Jackdaw will be essential as you progress in the story and the game will actually remind you of that so you have to spend some time in the open seas. Aside from different variations of ships plus the legendary ships that are really challenging, there are also naval forts that you can capture. You have to break its challenging defenses and have it infiltrated afterwards just like how the forts used to be infiltrated in thre previous games in the series. By capturing these forts, certain portions of the map will be revealed and will unlock more naval missions even collectibles. In addition to that, harpooning was also added in Black Flag where it is somehow the naval counterpart of hunting that was introduced in AC3. There are certain locations that you can do harpooning, from different species of sharks and whales while the other and rare locations are revealed randomly through online events. To be unlocked on the first few sequence of the game, is the diving bell which gives Edward the ability to explore the bottom of the ocean and reach more treasure.

With the vast implementation of the naval battle, the Carribean was also introduced as an open world environment so expect less loading screen while exploring the whole map though some of the key areas and mission progression is still powered by the typical Animus loading screen where the character can do nothing but run going nowhere. Part of the pirate life and sailing are the crew and sailors so it is also possible to recruit more crew as you go along and the more you upgrade the Jackdaw. There are random events where you can rescue pirates on your land activities, or recruit them on the nearest tavern in a town or an island, or you can also rescue crews from a sunken ship.

The land combat on the other hand, seems like the same old Assassin’s Creed game we’ve known. The stealth gameplay and combat feels way much better now as the movement is a bit more synchronized on how the character is being controlled. There’s a lot more objects where you can hide and perform assassination in Black Flag. Enemy detection and AI has undergone improvements as well, though the notoriety system from AC3 was already removed, they’ve added the alarm bell which improves how the enemy reinforcements works. Another addition to the game was the warehouse where you can get some supplies for the Jackdaw. The warehouse robbing requires Edward to locate the officer who has the key and get it but it will only be available if the warehouse is full. Assassin contracts are still in the game which is still a viable way to earn some money and to practice your assassination skills.

Since the story of the Black Flag isn’t focused about the Assassin versus the Templars issues, Ubisoft added the Templar Hunt missions which gives some light regarding the Assassins and Templar issues during Edward’s time. Templar Hunt missions are also fun counterpart of the main missions as somehow it also tells a story that are worth checking out which will also unlock an outfit once you complete them all. Piracy won’t be complete if there aren’t any treasures, aside from the typical chests that can be opened around. Edward was also tasked to look for the Mayan Stelae which comes with a mini puzzle like to solve that will also give you an outfit once completed.

One of the reasons why the Assassin’s Creed fans love the series is because of its link to the history. Even though it feels like the game had a shift from an assassin game to a pirate game, the love for history is still there. We can also see the efforts how every tropical islands was impressivle designed as part of the open world of Black Flag. Though some of the viewpoints and vista locations are quite redundant but the environment that it want to show is just a masterpiece.

Overall, Assassin’s Creed Black Flag is no doubt Ubisoft‘s best game in the series. All the flaws and what we found missing in the previous game was fulfilled in Black Flag. The open world design in the franchise is what most fans of the series have been wishing and it was just made possible in Black Flag. Definitely a game that shouldn’t be missed specially in the current-gen and those who aren’t stepping up to the next-gen for a while.

Assassin’s Creed IV: Black Flag
Conclusion
Assassin’s Creed Black Flag is no doubt Ubisoft‘s best game in the series. All the flaws and what we found missing in the previous game was fulfilled in Black Flag.
Positive
Flawless gameplay
Negative
5
GAMEHAUNT SCORE
Where to Buy
Amazon