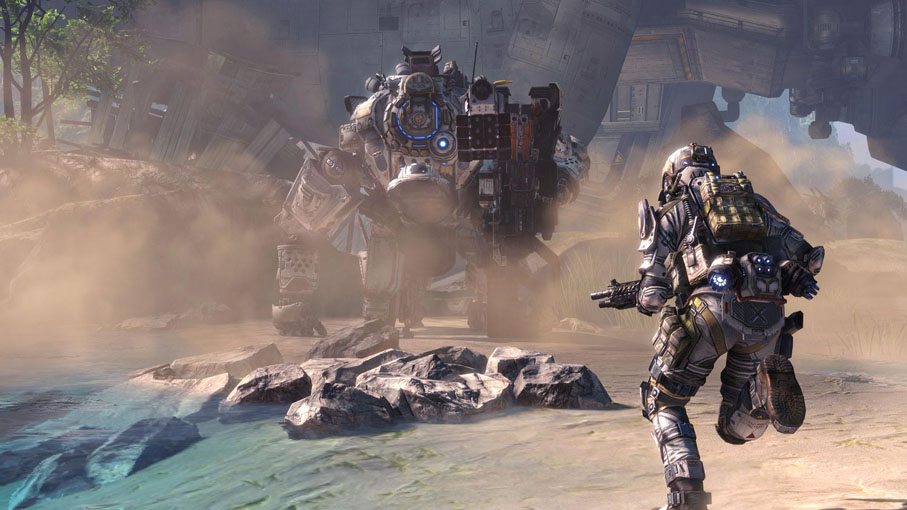 Are you a hardcore gamer of first-person shooter games? A fan of highly recognized titles like Call of Duty and Battlefield? A Sci-Fi fanatic? Or just someone who wants to look for something new to play? Well, Electronic Arts Inc. and Respawn Entertainment introduce you to Titanfall, the latest first-person shooter game that hit the stores earlier this year.

This is just the first game from Respawn Entertainment and yet Titanfall has been one of the most highly anticipated and highly-rated games of this year. Incorporating stunning graphics, easy gameplay and fast paced gaming, it’s no wonder it topped the gaming charts in no time. 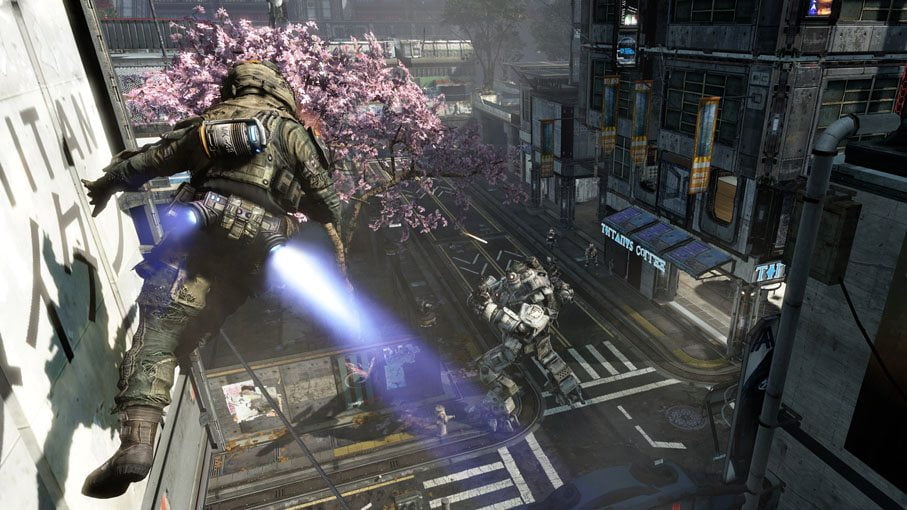 First thing we noticed with the game is the ability to play as a Titan. It’s really one of the novelties in playing this game and makes the gameplay more interesting. There are only a few differences in controlling the pilot to a titan which makes controls easier to remember and can let the player work through the game smoothly.

Playing as a pilot is the same experience you get with playing as a soldier in Battlefield and Call of Duty. But there are a few perks on tactical abilities. For pilots, there are three tactical abilities including the cloaking ability. You will be able to use this to hide yourself partially from other pilots and fully from titans, a neat function to avoid your enemies and helps you in reaching the objective if you are pressed for time.

The other two abilities are the Stim and Active Radar Pulse. Stim is a way to boost your pilot’s speed and health regeneration. It can only be used temporarily so try to use this carefully. Active Radar Pulse, on the other hand, allows the player (playing as a pilot only) to detect surrounding enemies through tough solid objects and walls.

For titans, they also have three tactical abilities. These are the Vortex Shield, Electric Smoke and Particle Wall. Vortex shield is probably one of our favorites to use when playing as a titan. Its ability to catch incoming projectiles and aim them at enemies is a sure way to get a critical hit or weaken the faction you’re fighting against. But also know that there is a time limit on the shield, so make sure not to hold on to the projectiles for a long time. Electric smoke is the ability to eject smoke from the titan that can partially blind your sight but it will also electrify nearby enemies within the smoke’s reach. Particle Wall also comes in handy too. You can use this to block your enemies’ hits and let you and your comrades hit the enemy through the wall. 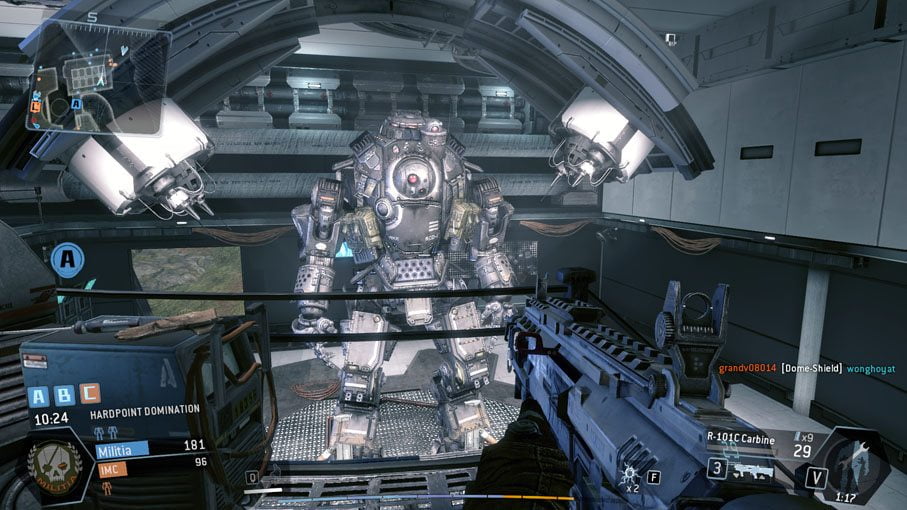 With the futuristic setting that the game has, the player’s abilities also need to be revolutionary as well as futuristic. The same goes for weapons.

Weapons used are mostly similar to what you would use if you played Battlefield and Call of Duty. The usual sniper rifles, side arms, shot guns and the likes. But we’re fighting against titans here too – and sometimes engage in a titan versus titan battle. Anti-titan weapons are available for pilots to use to defeat titans. You will have different anti-titan weapons that both give heavy damage and weaken your enemies, but these also have different disadvantages. It’s important to equip yourself with the right knowledge in using these anti-titan weapons so you may hit the target effectively.

When playing as a titan, you will also have your own weapons to choose from. Of course, a titan’s weapons deals even more damage to the enemy and can destroy a number of pilots, and can inflict heavy damage to a titan you’re up against. Just know that these weapons and their ability to attack opponents will vary from the type of titan you are using. Some may deliver low to high results.

There are three main types of Titans: Atlas class, Stryder class and Ogre Class. The Atlas Class is your frontline titans, ready to take to the battle and support your comrades immediately. The Stryder class is best used when you’re focused more on speed and agile movements for survivability, while the Ogre class is probably the titan that tops the two if you want lasting results on the battlefield. Equipped with the heavy premium armor, when you’re on a difficult mission that almost seems impossible, then the Ogre class is the best titan to go for if used correctly

Now let’s look at the visuals of the game. Depending on the console you are using, it will vary of course. The game is available for PC, Xbox One and Xbox 360. It is still unknown whether it will come out for PS3 and PS4. While playing Titanfall on the Xbox One, we were a bit disappointed. Compared to the PC version, the Xbox One version fails to deliver the clearer and brighter visuals that make you appreciate the game more. The same goes with the Xbox 360 with the even lower resolution. On the other hand, the PC version delivers excellent results. The player’s overall gaming experience is enhanced as the visuals are detailed even to the smallest of objects in the game. 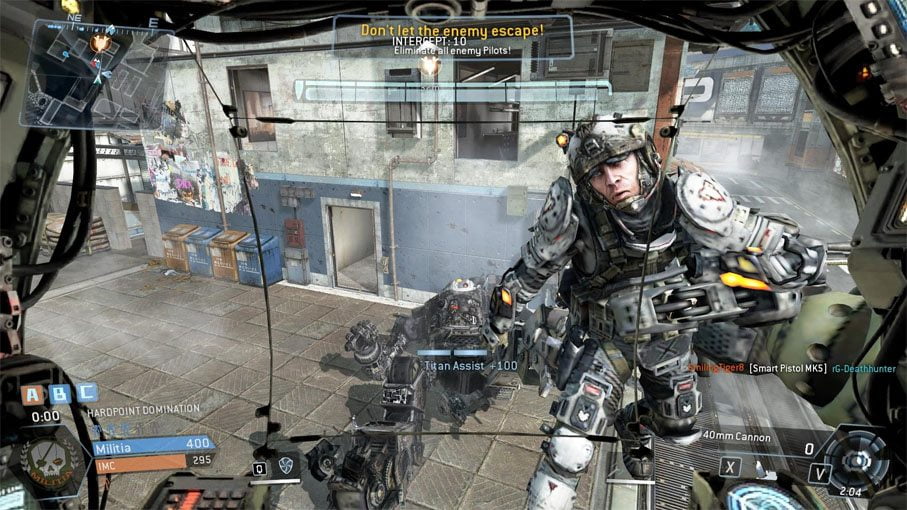 The story mostly picks up in the Campaign mode, but you do get introduced first to the two main factions – the Interstellar Manufacturing Corporation or IMC for short, and the Frontier Militia. We are told that humanity has now been living in the newer explored space called the Frontier. The Frontier’s colonies formed the Frontier Militia, to protect their homelands from invaders, especially from the IMC.

Having discovered that the Frontier’s colonies have so much resources and their goal to increase profit and wealth for both shareholders and the company, they decide to invade the Frontier. And this is where the Campaign mode comes in. Divided into nine parts for both Militia and IMC, for a total of 18 missions, we get introduced to an interesting cast of characters and a riveting story line that is straight to the point. We get to understand both of the factions’ goals and the motivation behind their actions.

So, the major question: can Titanfall really compete with major first-person shooter games like Battlefield and Call of Duty?

Call of Duty and Battlefield have superb gunplay and an array of extension packs and downloadable content available to try out. Basically, these two games can give the overall FPS experience and are each famous in their own right. However, Titanfall has some great features too. The advanced and polished graphics make you feel the game is not just made to be among other FPS games, but also try to dominate all of them.

The timeframe of the game is set in is also an added bonus. Being able to play with plasma guns, increased physical abilities, wall running and playing as a titan is something we FPS lovers have all been waiting for.

However, like all games, there is a huge drawback in Titanfall; and that is, you can’t play as a single-player. It relies solely on being played online and is heavily multiplayer-based. So for those who want to play this game just for fun or boost your personal stats when you have the time, then it’s best to choose Call of Duty or Battlefield instead. 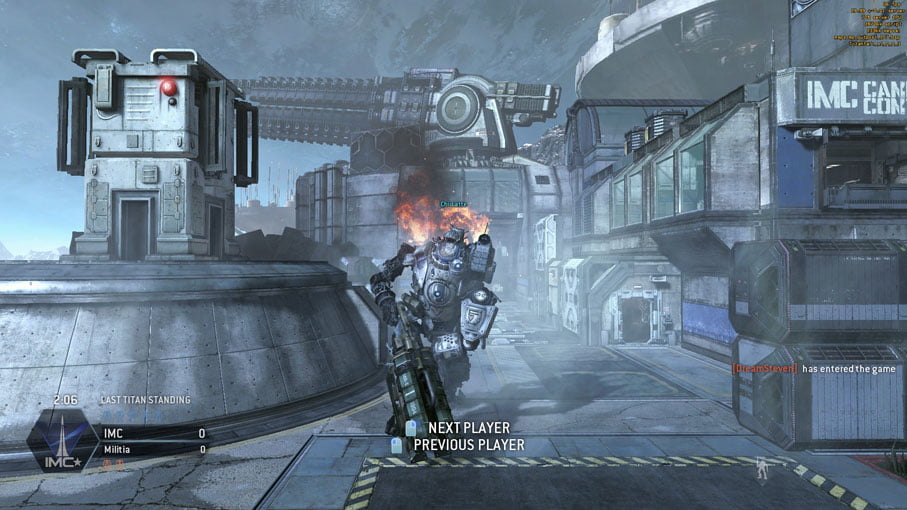 The lack of single-player mode is not appealing for someone who has played Call of Duty for many years. Though the gameplay is up to standards and can compete with the two major league games, the absence of single-player mode and the fact that it “can only be playable if online” will leave gamers think twice about purchasing this game.

Another problem the game might face is when they release another game under the title. The futuristic setting is already somehow the last thing you can do with FPS games. While Battlefield still retains its usual setting and realistic theme, Call of Duty has been releasing various extension packs and downloadable content – from zombies to playing as a renowned serial killer, Michael Myers (From the classic slasher horror movie: Halloween), Call of Duty makers have been delivering the very best they can offer to their loyal fans. And with “Call of Duty: Advanced Warfare” being released later this year, it might also contain futuristic aspects that can be slightly similar to Titanfall.

So, making another installation is going to be difficult for Respawn Entertainment as the Battlefield and Call of Duty franchises are big names in the gaming industry. Expectations are high for FPS games, so if the future installation does deliver the satisfaction to its fans, then it might turn out to be a successful franchise. If not, Respawn will really have to catch up and improve a whole lot more. 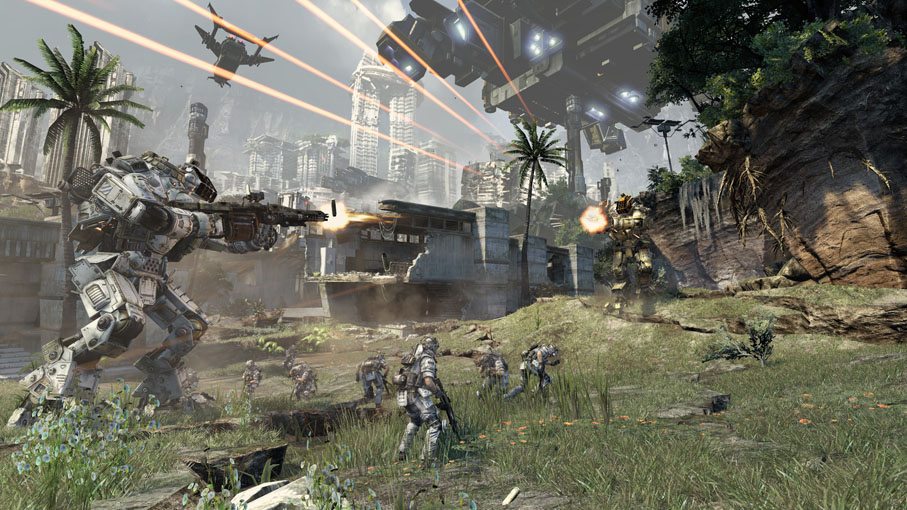 Titanfall is a fairly decent game out this 2014. This game is quite friendly for beginners, especially those who just started playing FPS games. For those who are veteran players of Battlefield and Call of Duty, Titanfall is a breath of fresh air. We have yet to see if there will be any improvements to be released later in the year; and maybe some downloadable content and extension packs.

What we really did like about Titanfall is that it’s a fresh take on first-person shooter games. With the addition of the titans, the feel of the game has become futuristic and innovative. The game itself is not meant to be realistic, but rather to persuade you to escape and experience a whole new kind of warfare in a science fiction world. If you happen to be looking for a new game out there, this is something you don’t want to miss. And if you have already bought a copy for yourself then, “Prepare for Titanfall”.