What if the world is wrought in conflict? A city devastated, humanity in chaos, a virus outbreaks and it consumes the larger part of a city – New York.

Who will stop the world from shattering?

A private entity called The Division takes on the task of saving humanity in the city of New York. The organization dispatches agents from all the corners of the city to scour every area and stop the chaotic state before it spreads like wildfire.

A Nameless Agent has two missions: to stop three competing forces that seek to gain control of the city, and to find a cure for the outbreak. You and your friends take on the mantle of the Nameless Agent in a disastrous Manhattan. With only your wits, your comrades, and your will to accomplish the mission, you venture to the plaguing lands.

You notice you’re not alone. The three factions have already gotten hold of the city. You have a new mission, to neutralize these factions and restore order to this once great city. 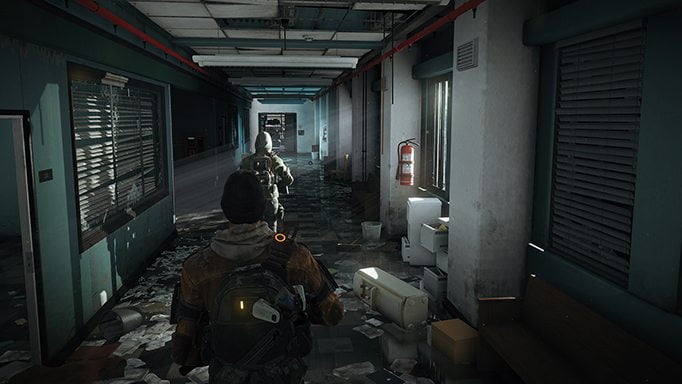 The Division is a third-person shooter game focused on exploring an open world set in Manhattan. The player assumes the role of a nameless Division agent sent out to the destructive and chaotic environment of a virus-struck city. The player character may choose to stack up to three valuable weapons and a few explosives to gain the tactical advantage needed against the enemies.

For players to advance, they have to complete missions to gain experience points, game currency, and abilities that will prove useful as the character progresses. Experience points can be used to make certain skills and abilities available such as activating gun turrets and using healing grenades. The game currency is used to improve the arsenal of the character to provide better weapons, ammunitions, and gears.

Player skills and abilities focus on three aspects: Medical, Security, and Tech. The medical aspect buffs the player with health items and skills that can be used to heal players. Security focuses on the abilities of that ensures an all-around defense to negate damage or add damage done to enemies. The Tech aspect is one that should not be neglected. A unique aspect in the game, Tech provides certain computer and technological items (such as gun turrets and heat activated mines) that give the best possible advantage to a player. 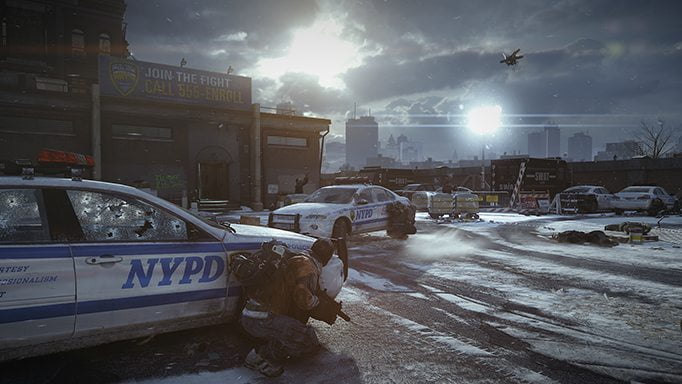 A distinct dynamic feature in Tom Clancy’s The Division is the use of a time-based weather system. Unlike other shooting-based games where the weather is used as a means to enrich the game environment, The Division simulates weather conditions to provide advantages and disadvantages to players. For example, rainstorms greatly affects the player’s visibility at the same time makes it difficult to aim.

The game also uses a day and night cycle that affects the behavior of enemies and non-playable characters. 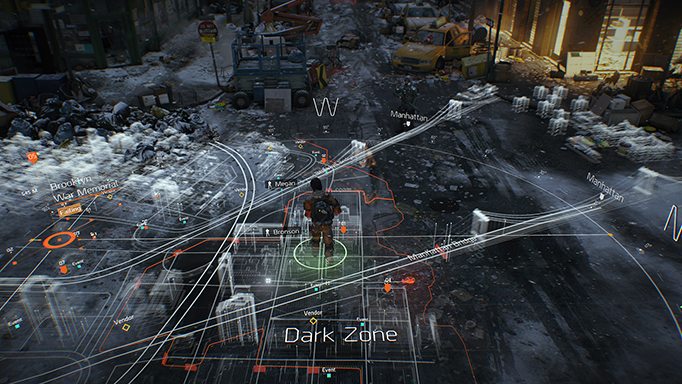 The Division’s dystopic environment makes a compatible contrast with the use of rich, deep texture and palette. At first glance, one may assume that the character and game environment is almost life-like, thanks to the use of next-generation visual engines.

The 1:1 virtual replica of Manhattan and New York is a delight for gamers. The precise resolution and dimension of the city provides a breathtaking view on the beauty of a city sought in chaos.

The user interface is not separate from the game, as compared to other shooter games. A non-intrusive designed is used to foster the sense of realism the game wants to emulate. It makes use of distinct spartan features that do not hinder the dark tone of the game, but instead, well complements the shoot-and-loot gameplay.

The player character blends well into the environment. Characters are designed to fully immerse with the dystopic city – that they are part of it.

Players who are familiar with shooter games know that when it comes to audio effects, less is more. The Division offers subtle yet poignant musical scores to enliven the grim nature of a city doomed for destruction. Yet, as soon as the player is in combat, the crisp sound of firepower is pronounced and adapts to what sort of environment the combat is. 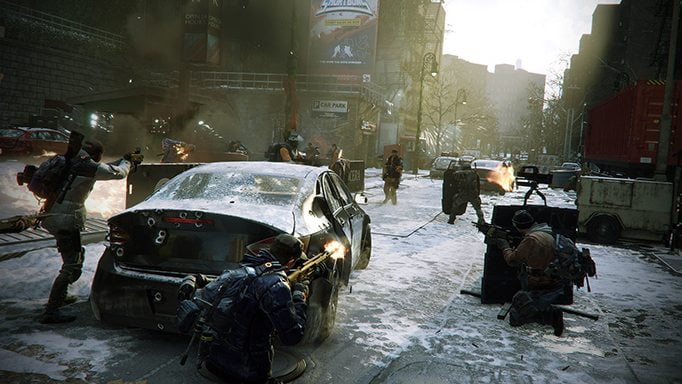 Online multiplayer shooting games are common, and The Division is just among dozens of games that provide the fast-paced action experience. What sets the game apart from others is the integration of the game environment to the gameplay. Players may utilize the walls for cover as well as use other surfaces to gain the tactical advantage.

The Division sets itself apart from the normal point-and-shoot game by using the environment not as a stage for the game, but as an integral part that adds dimension and purpose to combat encounters.

The Division has a storyline that will keep you engaged for hours. The deep multi-faceted focus and customization of the game adds to its replay value. But as soon as the game starts to get harder, The Dark Zone adds depth to the game by making it a competition-based online community. If the main campaign has high replay value, the Dark Zone will keep you to your feet in the swiftness of a multiplayer mode. 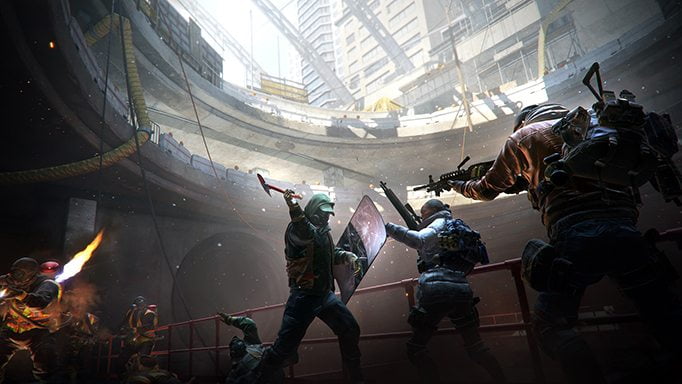 A dystopic environment is a challenge for game developers because it risks the commercial palatability of a game. But with only 24 hours after its release, Tom Clancy’s The Division achieved unparalleled commercial and critical success – and after hitting $330 million in sales in just five days, it surpassed Destiny’s commercial success.

The rich environment and dynamic gameplay works best for PC, Xbox and PlayStation. For console gamers, there is a slight distinction between Xbox One gameplay and PS4 gameplay. Xbox One provides greater console reactivity, offering the players a deeper sense of involvement in the game as well as realism. Moreover, Xbox One users have a slight advantage in the game customizability. The PS4 console however, masterfully attempts to stun players with breathtaking graphics that immerses the players as if part of the game itself. In the PS4’s successful attempt to immerse the players, it further complements it by adding a strong community base to play along with in the Dark Zone. 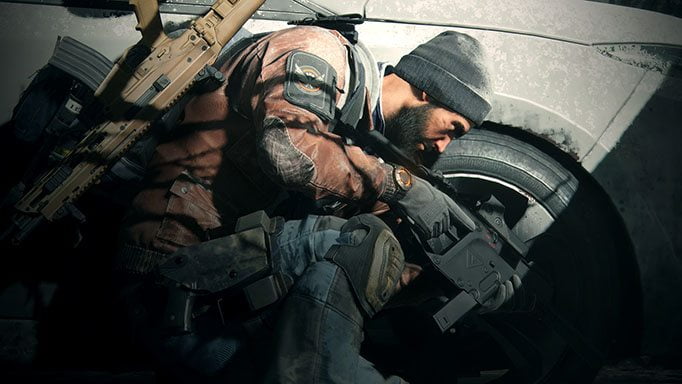 With the Dark Zone, the main campaign alone is enough to keep you on your seat for hours until you finish mission after mission, only to realize that the game is open ended. However, with the inclusion of Dark Zone, Tom Clancy’s The Division surpasses the realm of a game and starts dwelling into realism simulation.

The Division thins the line of what is a game concept and what is possible or bound to happen. It tickles the player’s mind into thinking, “What if this happens?” and submits the player into a dark fast-paced world where only one organization, The Division, has a noble cause. Should ArcheAge Lower Its Level Cap?