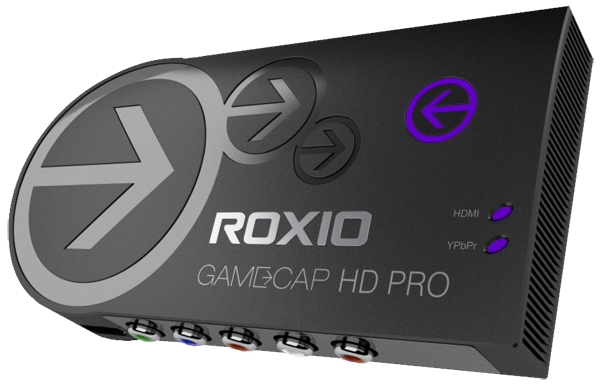 Today, Corel announced the release of Roxio® Game Capture HD PRO, the most comprehensive and easiest way for gamers to capture, edit, and share, their best gaming moments – all in stunning HD. For gaming enthusiasts, Roxio Game Capture HD PRO is the perfect all-in-one solution and is the first capture device to offer live streaming!

Roxio Game Capture HD PRO is the complete package for gamers as it not only includes a top of the line capture card that encodes in H.264, enabling it to record in 720p and 1080 60i/30p, it also includes a full featured video editor tailored specifically to a gamers’ needs. A new partnership with Twitch allows users to live stream directly to their channel without having to leave the application – all at a price that won’t break the bank!

Thanks to its partnership with Twitch, the world’s largest video game broadcasting community, Roxio Game Capture HD Pro users can now live stream their gameplay directly from the application to their Twitch channel. Streamers can also add voiceover in real time to their gameplay to communicate with their viewers.

“We’re proud to partner with forward-thinking companies like Roxio,” said Kevin Lin, COO of Twitch. “We believe that in the very near future playing a game will be the same thing as broadcasting a game. As the world’s largest live video platform and community for gamers, we are very interested in making it as easy as possible for people to capture and share their gameplay. Roxio is helping gamers do just that.”

The gaming edition of Roxio’s market leading video editing solution helps users turn their gameplay footage into incredible movies. Designed with gamers’ needs in mind, it includes gaming specific editing options to give every video a professional look and feel. Gamers can use the integrated voice changer to match their voiceover to their game; the picture-in-picture feature to layer separate video tracks, and choose from over 90 transitions to pull their masterpieces together. Once they are happy with their work they can upload it to YouTube and Facebook simultaneously or output it to various formats to play on PCs or mobile devices such as iPads, iPhones and iPods.