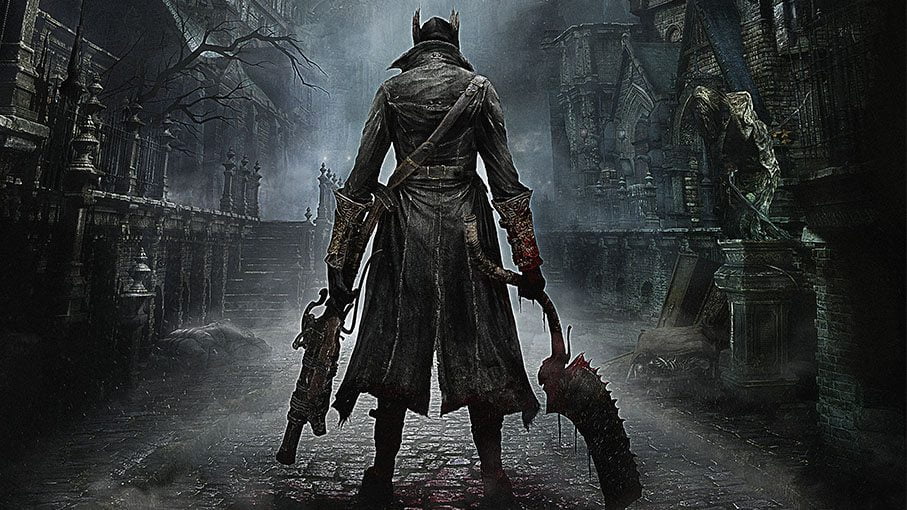 The gothic city of Yharnam has been plagued with an endemic illness, its inhabitants turned into monstrous creatures. You are infected and in search of a cure, but the horrors of the land block the way, and to get pass you must have a strong mind, a large blade, and a thirst for blood.

Bloodborne is an action-horror role-playing game developed by From Software. Despite not having the word “Souls” in its title, Bloodborne is set to be a spiritual successor to the Souls series and perhaps an innovator as well. Like its predecessors, the game offers the player a difficult trial and error phase. Navigating through the dark blood stained streets, passing through Victorian style buildings with spine tingling monsters roaming and lurking in every nook and cranny. 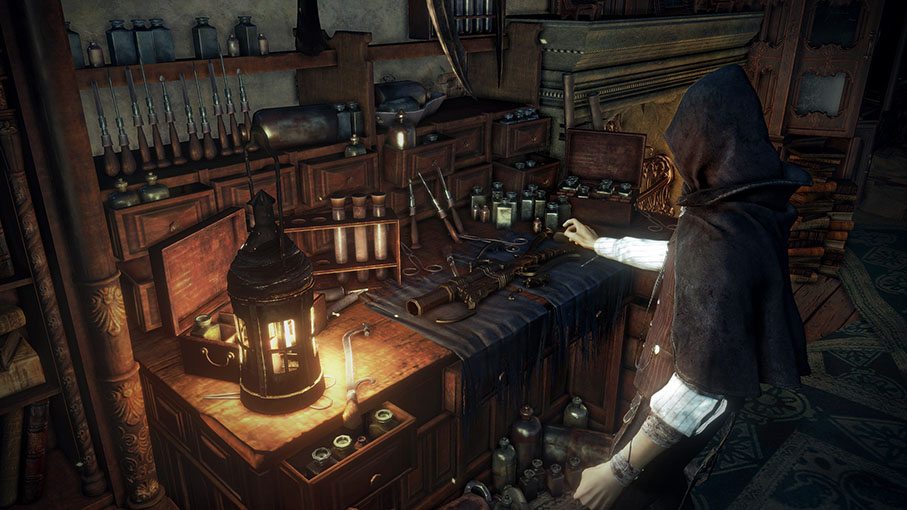 The gameplay style is very reminiscent of the previous Souls games; almost nothing has changed and yet many have. Bloodborne offers a much faster paced fighting style. The shields from previous game versions are pretty much non-existent. Sure, you could pick up a wooden one, but it wouldn’t do you much good and would only be a burden. Now, you are forced to go in and charge your enemy instead of parrying and waiting for your turn to attack behind your shield. But fear not because for every loss, there is a gain, and this gain is one with bullets.

Replacing the shield are secondary ranged weapons. These include barrel guns, flintlocks, and cannons that help in stunning the enemy and charging at them while they’re down; but you can’t truly rely on them because they have limited ammo. It’s the first to divert the gameplay from previous games, but luckily, it turned out quite well. It also adds a weapon mechanic where you can evolve your main melee weapon, changing it from small and quick to big and strong, gaining flexibility in the process.

The change in style is a welcome innovation as it considers new players of the franchise. So, if you think you’re a pro at the Souls games, think again because Bloodborne will have you falling and dying even more than you did playing Dark Souls and Demon Souls because of the change of control and mechanics which you will constantly have to learn and adjust to in order to get better. 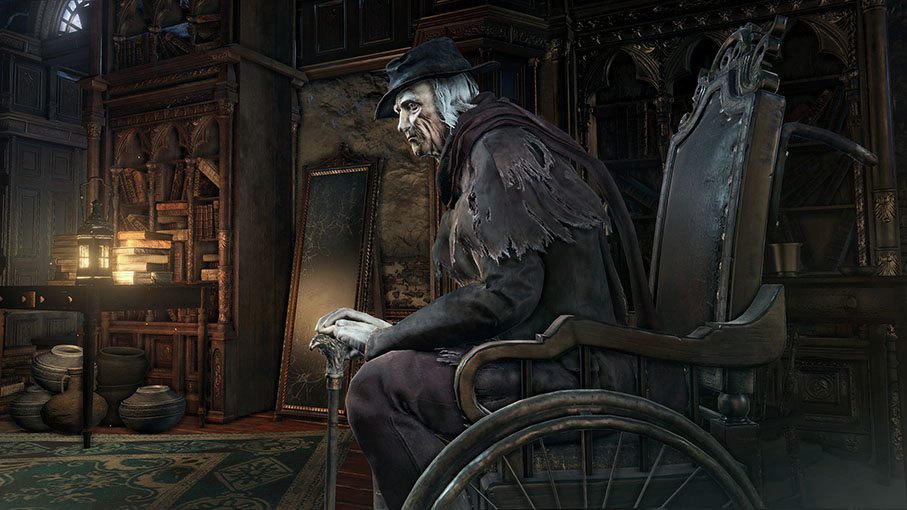 Immersion comes naturally in a game such as this, but Bloodborne’s dance with our mind and emotions is quite different. The spectacular weary view of the world set in this game makes you wonder how deep this game goes, on how much unexplored parts you have yet to discover. Hearing the screams of beings that were once people as you slay them for their blood in order survive, the statements and sentences said by the survivors you meet, contemplating whether they’re decent or on the brink of insanity. Talking to said survivors changes the flow of the game as well, so it’s interesting to see what might happen next when you decide to talk to the next living person nearby.

The eerie feeling that the sounds evoke only add up to the stunning visuals the PS4 exclusive has to offer. Playing it gives you mental disturbance; the characters you encounter are disoriented and unstable like the world around you. the game itself surpasses horror games like Silent Hill or Resident Evil. Story wise, you’ll be able to finish the game in around 60 hours, but due to the twist and turns you’ll be making, unexplored areas, and secrets and mysteries yet to be unravelled, Bloodborne offers hundreds of hours of exciting gameplay. This is a must and a plus when buying a game as immersive as this. 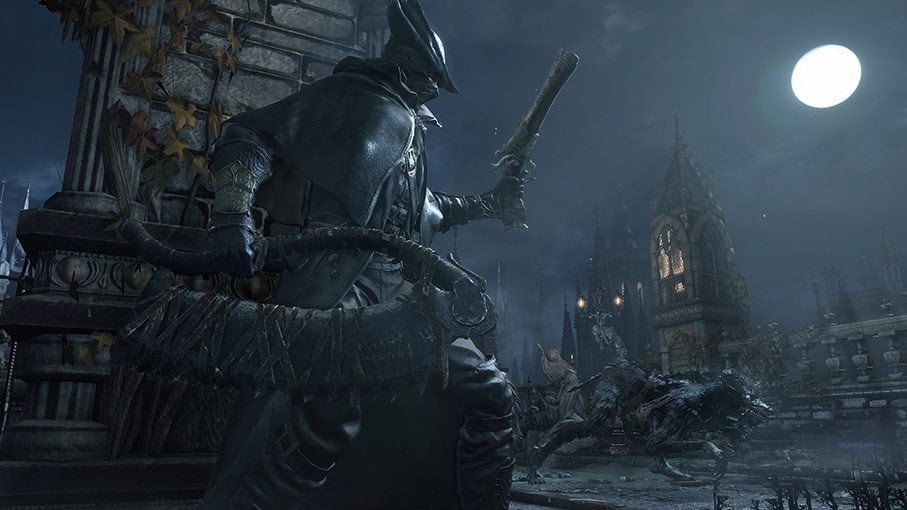 Despite spending most of your time playing alone in the world, the game offers cooperative mode wherein you could get a friend or a fellow player to help you out during your journey, this can be very useful, especially in boss battles where one can distract and the other can flank, making the experience satisfying for strategic players. Other players could also guide you on your blood thirsty quest by leaving notes on the ground. The game also features a shadow system wherein you get to see what direction other players went and even see how they died in a specific location via shadows. PVP is also a viable option when playing, so if the unlikely day comes when you get bored of playing in single player mode, you can always challenge others in a fight to the death and swim in their blood afterwards.

The only bad things I can say about this game are the loading time and the frame rates. It takes a while to load all the data despite having the latest hardware. It also breaks the immersion for when you die and you have to wait a significant amount of time again for the game to load, but that can hopefully be fixed with a patch in the future. On other times, the frame rate drops. This is irritating, especially in boss fights where you have to be quick. But other than those minor flaws, I can see no other problems in the game, It’s still worthy of an AAA title. 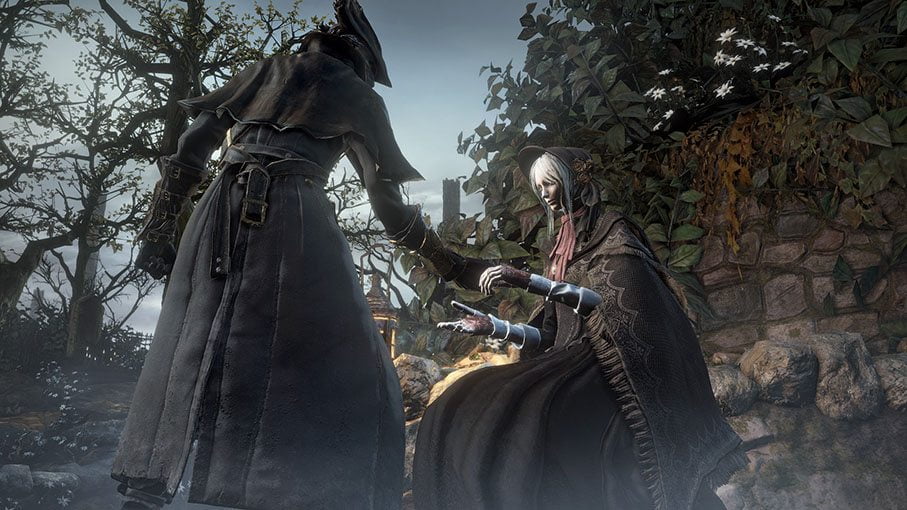 In this day and age when games are released half-finished and plagued with bugs and errors, Bloodborne is one game that gamers have been waiting for in a long while. A relief of sorts, a restoration of faith that the gaming industry will rise to its feet and release amazing content such as this once again, as it has in the past.

A vast world to explore, secrets waiting to be uncovered, stories waiting to be heard, places and dungeons begging to be discovered, immersion is the key to what makes this game great.  A haunting setting with a great amount of content to play with, Bloodborne lives up to its predecessor’s standards and expectation of gamers, even rising above and beyond it. If you haven’t picked up a new gen console yet, then this is the perfect time to get a PS4. While you’re at it, get Bloodborne. I promise it will be worth every penny.