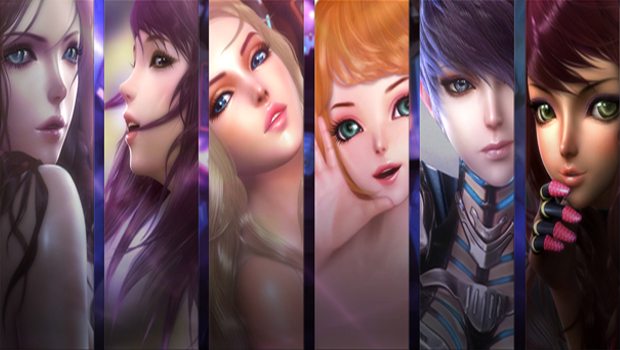 Scarlet Blade is Mature Sci-Fi Theme MMORPG that takes place on the future version of Earth after humanity become extinct and annihilated by the alien invaders called Nurak. The last hope for mankind to regain Earth as it’s home world is to fight for it’s freedom against the devilish creatures from other planet. And the only way to do that is to form clone Super-Soldiers known as Arkana, an all female super soldiers and the last hope of Earth.

Environment is pretty astonishing, beautiful and colorful world. With big trees, unknown plants, alien mobs, bright lightings, etc. Totally what you imagine for a Sci-Fi theme MMO. And believe it or not, its Earth in a few hundred years, that is according to it’s lore. However, the places to explore is very limited and not everything you see on the vast plain is reachable. Moreover, it’s an interesting world with a very awesome and artistic designs, it’s breathtaking and out of this world.

The controls are not something that requires you to read the manual. It’s an action MMORPG, what do you expect. Pretty much like any other MMORPG. You can simply move your character by pressing WASD for directions and mouse to interact with NPC’s and other objects. No sidesteps or anything, it’s as simple as that, which makes the gameplay really easy. The gameplay is smooth, detailed and precise.

There are 6 playable all female classes in the game. Namely:

Riding a Mecha-Robot is possibly one the most coolest feeling ever , even though it’s not really you. Mech-Mode is one of the key features of the game, although it’s not really a new thing, it’s still awesome. When you’re in mech-mode, your skills change depending on your job class, your hp will be higher, attack power will dramatically go up, and all that stuff. Every class has its own unique skills, everyone have flashy skills and movements to be envious, and to think that all classes are females. These iron maidens fighting to save humanity while looking good and hot doing it. It’s pretty badass in my opinion.

Scarlet Blade has an intense PVP and battlegrounds, the fun is limitless on it’s Massive PVP’s. Not only you get to kill the opposite faction for fun but you can get experience every kill as well, whether it’s your kill or you kill steal.  The more damage you deal with the  enemy the more experience you get. However, if you kill-steal, you only get the portion of it. It’s teamwork on the warzone, so I guess it doesn’t really matter. For Medics, since they are support classes, instead of damage counts on enemies, it now depends on how much they heal on their fellow faction mates.

The game focuses on huge and intense PVP’s, that urges players to go and kill enemy faction because of the benefits you can get from it. It’s no wonder there’s also ranking and special rewards that you can trade for the points you gain from killing your enemies.  So you might as well be serious, go on killing spree and kick some girly butt.

Character customization is very limited, the fact that you can’t create a male character to your liking is one of it. I’m sure know that every guy have their own type, some like big boobies others don’t, some like taller girls others don’t. Every job class have big boobies except for sentinels, because that would be wrong in so many ways. It’s already a mature game, why not let the players customize those assets.  However, I’m sure the newest feature which is outfit customization will be seen in the Open Beta.

Such as pet system, puzzles, instance, enchantment, etc. It’s not really new, however the club really takes the cake. It’s a feature in the game in which you will enter an awesome room with awesome techno futuristic sound. If you go in the dance floor, your character will dance automatically and plus your pet gain experience while your character is partying and you’re literally away from keyboard. It’s a good hangout place.

We all know the fact, that Scarlet Blade is intended for mature audiences, however this theme have it’s own downside, instead of being an asset it become a flaw. The mature rating is limiting the player base, not allowing players 17 years old below. Its like saying don’t watch porn to a 15 year old kid. I don’t think Aeria Games will call each and everyone’s mom to confirm if the player registered to play Scarlet Blade is 17 years old above, because that would be embarrassing.  Not every guy wants a female character and believe it or not some guy don’t want something too revealing, maybe because instead of concentrating in the game they concentrate on some other thing, whatever the reason is, Not everyone wants it. As a female gamer, I find it offensive, but not much since I’m open minded and I already seen a lot. But in some other female gamers, I doubt that. Maybe a descent lady can play the game, but don’t expect much.

The truth is, I love the game not because of it’s mature theme, but because of it’s beautiful and rich world. In fact the lore is quite impressive and is worth reading, especially the Mech-Mode and it’s Massive PVP’s and PK’s which is really fun and so exciting. The game is a bit glitchy, understandable since it’s still on Close Beta. But since Aeria Games is a trusted game publisher and a responsible company, I’m sure they can do something about those glitches. If you want to know more and check it out before Open Beta starts. You can simply visit the site here.