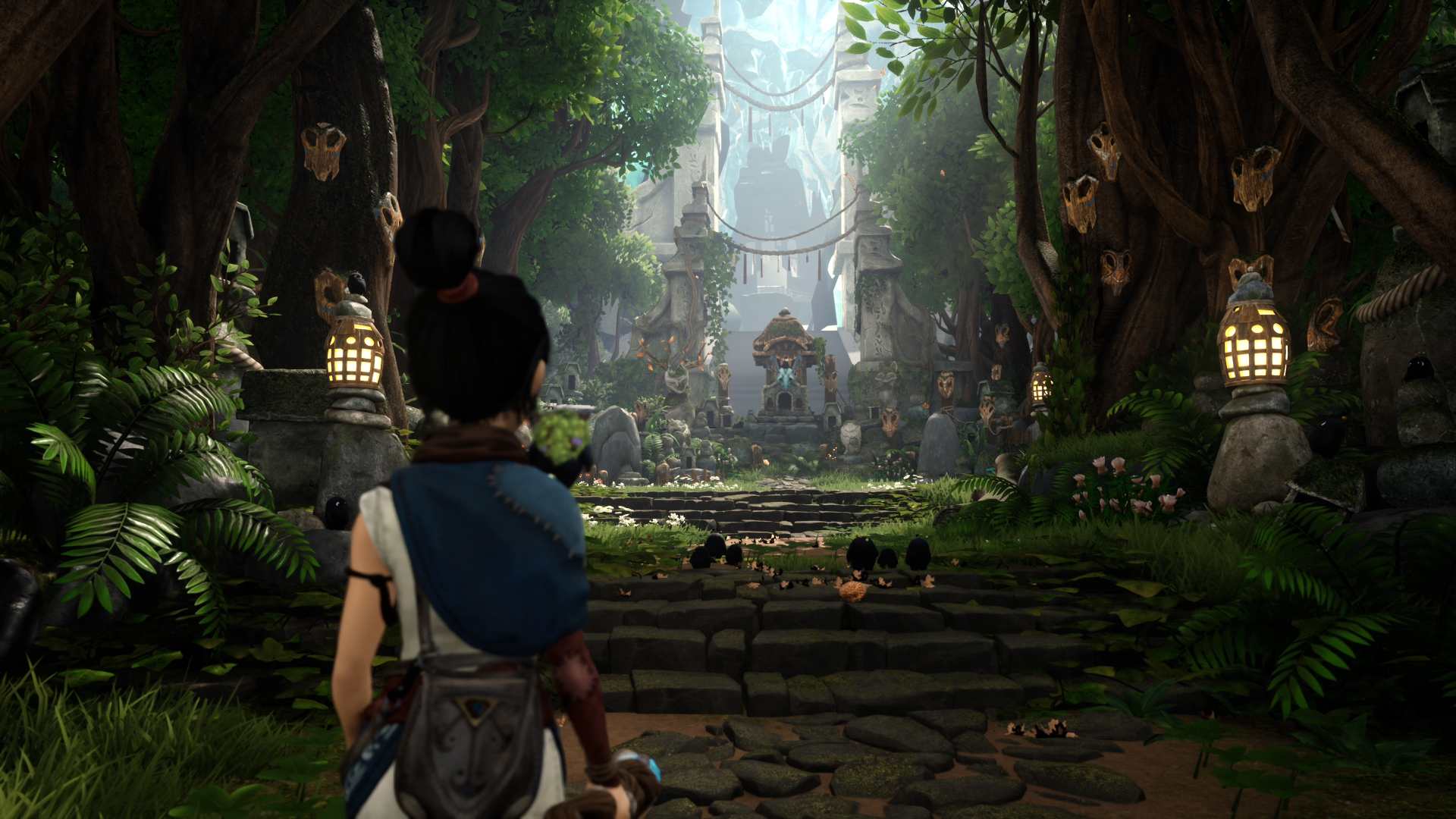 In a mysterious world with appealing scenery, Kena: Bridge of Spirits provides a rich and amusing gameplay experience. With its Pixar-like animation, this game even introduces attractive and cute characters to combine throughout the journey. There are tons of places to explore, stories to reveal, and most importantly, spirits to save. She saves the spirits from the corruption that plagues the surrounding spirits, turning them into monsters.

That is because of a trauma they had in their past. The variety of gameplay styles, including platforming, puzzle-solving, and action combat, makes boredom an impossibility in this game.

The setting encourages exploration in the semi-open space of the village, and the platforming element offers a joyful value in the gameplay. Jumping and climbing lever the level of amusement, and the existence of shrines and puzzles add the core element of Zelda games.

The adventure is set in a breathtaking open world of fantastic landscapes and pleasant scenery. The open-world calls for taking an adventure with many actions to take, exploration, gathering collectibles, and opening chests during the adventure. From the chests, you can get useful things, and also some kind of currency to exchange for adorable hats for the Rots.

All of that leads the player to observe and enjoy the beauty of the game. The indie studio did really great with the animation and visuals, with the cut scenes seeming as if they were from a Pixar animated film. The characters are well-designed and animated and their vivid facial expressions make them look as if they were actually alive, especially the cute furry Rots.

The art direction is highly inspired by the 3D Zelda games prior to Breath of The Wild, especially the shrine’s design. Even though the world is filled with appealing beauty, its light design shows the dark side of it to complete the sense of the story. The rich light design of the weapons though, adds a satisfying visualization as it fits and balances the darkness of the setting. All of this is combined with a distinctive soundtrack featuring traditional Balinese music.

The game has a simple-but-pleasant formula. Kena: Bridge of Spirits melee attacks monsters with multiple abilities, including heavy and light attacks. In the game’s action combat system, she fights with the staff as her main weapon. The staff can be enhanced and more abilities can be discovered as the game progresses.

For example, the staff can evolve and turn into a bow by which she can snipe things from a distance, in addition to the bombs she can throw on enemies. Kena: Bridge of Spirits can also defend herself using a bobble-like barrier that can appear and disappear. It is easy to use overall, but it may get tricky as it requires wise handling and good timing. She can heal herself by going to specific mediation spots.

The cute fluffy dudes, aka Rots, are of great assistance as they can sniff out collectibles to buy cosmetics for them, help solve puzzles as they flip and move things around, and knock out corrupted spirits. They can be ordered to lock down or distract enemies to help the player attack weak points or clear up weaker monsters to focus on stronger ones.

The puzzles of Kena: Bridge of Spirits game lie in the shrines scattered around the map and are of delightful ease to balance with the somewhat challenging combats. Surprisingly, overthinking them might make them more difficult. The puzzles are often rewarded with observation skills to upgrade the abilities of the main character.

Kena: Bridge of Spirits gameplay overall is rather fun than challenging. Nevertheless, you need to be prepared for the final fight, as it won’t be as easy as you expected from the previous combats you had.  However, the game punishes a player who rushes things over instead of waiting for the right moment to strike and rewards patience and wise timing.

There is something really good about this game, and it is that it has areas littered with helpful environmental tips to make it easier for players to know where they can go. The platforming element is similar to one of Ratchet and Clank games, it is full of various terrain. There are falls to jump over, mountains to climb, and different-sized rocks here and there to hop on. Figuring out the combo of moves and the right sequence of places to go to is so fun in itself.

The player can discover new ways and places in the world with the use of weapons so they can jump and climb before getting back to their previous stats. The jumping and climbing mechanisms are similar to those of Uncharted and the Tomb Raider games.

To sum things up, Kena: Bridge of Spirits excels at providing players an immersive gameplay experience with various elements of visualization, and outstanding art style. In addition to the amazing scenery, the combination of different gameplay styles and easy-to-use UI has boosted its entertaining value. The devs definitely succeeded at merging factors of enjoyment inspired by many other well-known video games that gamers already know and love.

The ability to take photos and get cosmetics to the adorable Rots, in addition to discovering untold stories and mysteries the game is filled with makes it worth playing more than once. It was reviewed on PS5, and it deserves a full score easily. We highly recommend playing it.

Kena: Bridge of Spirits, Reviewing The Masterpiece
Perfect
The game offers a rich gameplay experience various in gaming mechanics, full of pleasing scenery and warm feelings.
Positive
Negative
5
5 out of 5