Deepcool is a company that specializes in producing high-quality computer cooling equipment and chassis. It was first established in 1996 and was headquartered in Beijing. Over the years, we’ve seen some products that comes with weird and wacky designs being launched by Deepcool, but it has always garnered attention among the customers and also received a lot of praise and recognition. Recently, they’ve launched an all-new liquid cooler that comes in two variants including 240mm and 280 mm radiators.

The Storm Castle 240 RGB assures with excellent cooling capabilities with great performance – thanks to the big heat contact areas present below the RGB pumps.  The AIO liquid cooler is ideally suited for Intel and AMD based PCs. The liquid cooler comes with double window panes along with top quality 16.7M true color lighting feature that provides your system with an appealing illumination. The copper CPU block is larger when compared with other liquid coolers and the specially optimized micro water channel allows to extend the heat contact areas to a great extent and thereby increasing the heat circulation within the system. 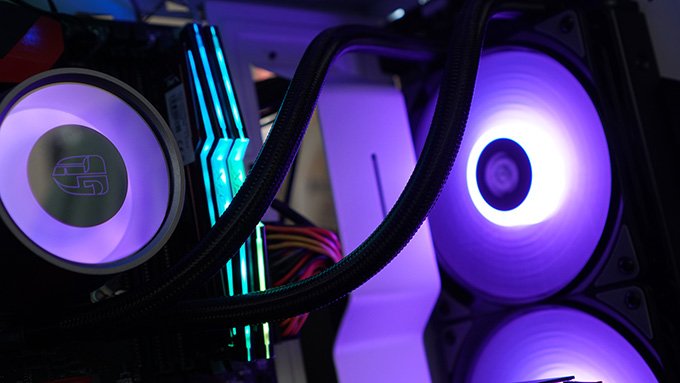 When many manufacturers are looking to decrease the size of their coolers, Deepcool certainly has gone all the way out to provide a unit that is much bigger and measures around 71mm in height. It looks pretty weird when the size of the unit, but certainly the unit comes with a lot of advantages with its oversized design. When you look at the aesthetic point of view, the AIO liquid cooler’s top section of the pump comes with two window panes and the large gap I section is illuminated with RGB light effects.

We’ve seen many weird design coolers previously like the Kraken from NZXT and the MasterLiquid RGB from Cooler Master, but definitely the Castle 240 RGB stands out among its competitors with its amazing light effects. Even when you turn off the lights, the top portion of the pump looks almost similar to a beautiful mirror like finish.

Another big advantage of the oversized pump is it provides enough room below to even accommodate a 550mm wide copper block that can include advanced and latest CPU sockets in the market like the giant sized Threadripper from AMD.

Even though the pump is a major attraction and the talking point of the Deep Cool Castle liquid cooler, the other aspects include the aluminum radiator that is connected to the pump through flexible tubing. The double 120mm PWM fans enhance the RGB effect while it is operating at its top speed of 1800 RPM. 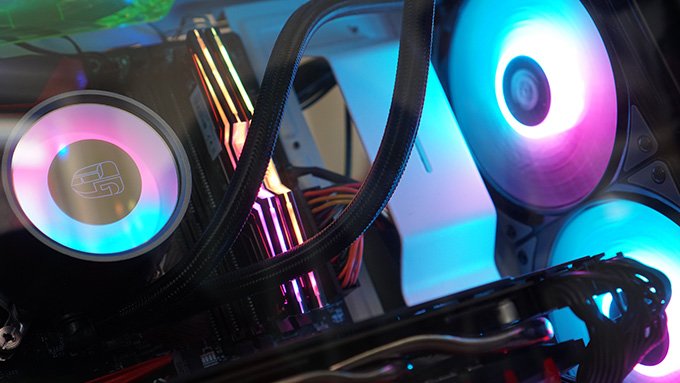 Mounting the kit is pretty much simple as you just need to secure the pump to the CPU using the backplates provided in the package for the sockets. But unlike other coolers, there are no standoffs provided with the pump to tightly secure it with the CPU and hence you need to carefully align the parts. There is also a thermal paste provided with the package that can help if the installation goes wrong. The complicated part of the installation is the wiring aspect as it each of the illuminated items comes with 3-pin RGB cables which need to be carefully accommodated inside.But the Castle 240 RGB has understood the complications involved and ships with the pump some useful accessories to manage the clutter with the wirings. A 4-way PWM hub is provided to enable for easier connection of the fans with the motherboard header and a SATA powered lighting controller is also provided in case you are installing the pump in the system that comes with a motherboard without RGB headers. The package also comes with a 4-way RGB splitter to connect the fans to the port easily. But Deepcool doesn’t offer you with any software to customize the effects or the colors as it could be controlled only with the help of the lighting app of your motherboard or the buttons provided in the hardware controller. 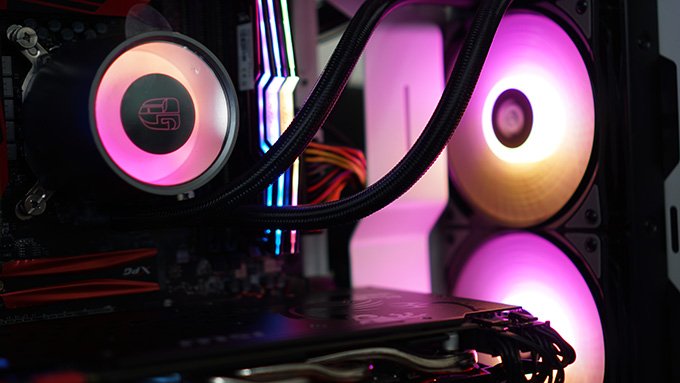 The synchronized effects offered by the liquid cooler is largely supported on most of the latest brand motherboards including ASUS, MSI, ASRock and Gigabyte. The addressable LEDs are certainly the best we’ve seen in a liquid cooler for a long time. Maybe the only odd aspect about the cooler is the presence of the Gamer Storm logo that exists on the top of the pump lid and doesn’t do any good for the overall appeal of the pump.

When it comes to liquid coolers, most of the models out there in the market doesn’t differ a great deal in performance and only the appearance, the packaging and the noise aspects make each one unique in their own way. And when you notice the noise coming out of the cooler, does seem to be a bit loud during an extremely hot day. But the pump is specially designed to sustain the noise to a great effect. 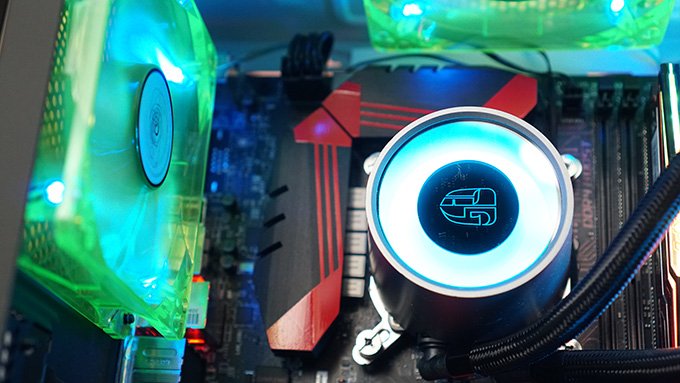 Deepcool certainly may not have made a mark in the liquid cooler market, but time and again they’ve come up with unique designs and models that makes heads turn. The latest example is the launch of the Deepcool Gamer Storm Castle 240 RGB liquid cooler that comes with a 3-year warranty period and provides an all-in-one solution for all cooling needs for your gaming PC. It certainly stands out from the crowd with its high-quality pump featuring outstanding RGB lights that you could ever see on a CPU cooler.

Even though the size of the pump might be a bit bulky and there are a lot of wirings when compared with other liquid coolers in the market, the coolest aspect is the appealing RGB lights that certainly enhances the look of your gaming PC to a great extent. 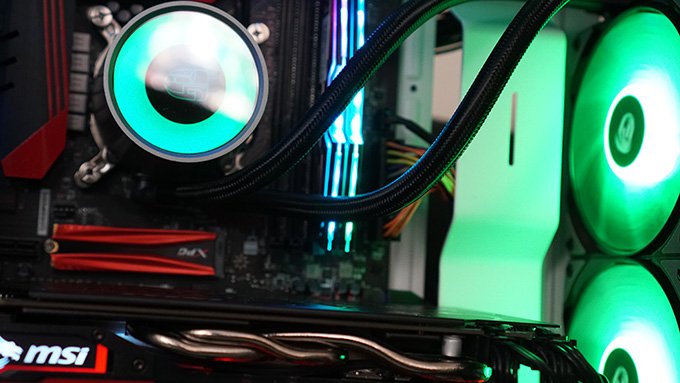