The all-new XPG GAMMIX S10 from the house of ADATA is launched primarily targeting the gaming enthusiasts. XPG also called “Xtreme Performance Gear” comes with M.2 2289 form factor that is specially designed for gaming PCs and notebooks to take your gaming experience to the next level. The XPG GAMMIX S10 comes equipped with super-fast Gen 3×4 Interface that provides an R/W speed of up to 1800/850 MBps. It provides a high endurance rating of 2,000,000 hours MTBF, thanks to the 3D TLC NAND flash memory used in the S10 M.2 SSD series. It is extremely slim and lightweight.

One of the essential features that make this SSD stay ahead of its competitors is the quality heatsink that significantly reduces the temperatures by up to 10°C, which was a big issue with other SSDs. Some other notable features of this ADATA XPG GAMMIX S10 series include excellent SLC caching, outstanding DRAM Cache Buffer along with LDPC ECC technologies. The ADATA XPG GAMMIX S10 also comes with a 5-year warranty. Even though the 3D NAND provides substantial storage capabilities, the speed was limited and this is where PCIe interface plays an exceptional role in providing increased speed levels. 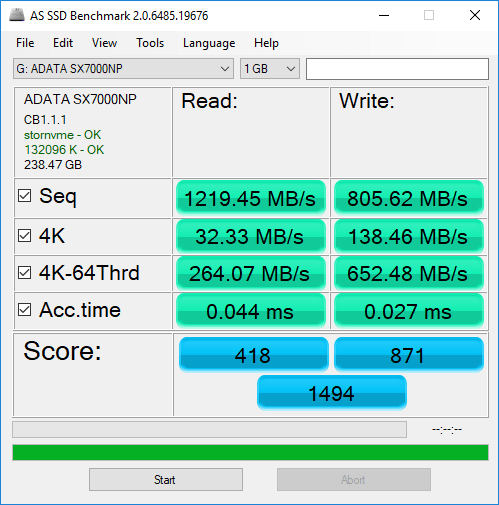 When it comes to packaging, the GAMMIX S10 comes neatly packed in a black color package with all the needed details on top of it including the model, capacity of the SSD, 3D NAND etc. the front portion of the package contains attractive photos of the heat sink in striking red and black color. And as usual to all ADATA series packaging, the back side displays details of the supported technology, its features along with 5-year warranty badge. The sides of the package display other important features of the SSD. When it comes to unpacking the SSD, it seems it is tightly packed in a kind of premium package. You need to open the top of the cover to see the SSD comfortably sitting in neatly packed dense foam. The top of the cover also displays the significant features of the SSD. It is placed with maximum protection to ensure that the SSD doesn’t get damaged at any cost.

The heatsink on the GAMMIX S10 is kept to a low profile, but that doesn’t mean it comprises of metal with just a single sheet. The heat sink is attractive and well designed in black and red color, where most of the outer side of the package comes in red color and the contoured portion in black. The heatsink or the heat spreader has the thermal compound on the underside and doesn’t make big contact with the controller. On the outer, it doesn’t look to cool the drive to a great extent, but it does a great job in cooling down the temperature to almost 10%. 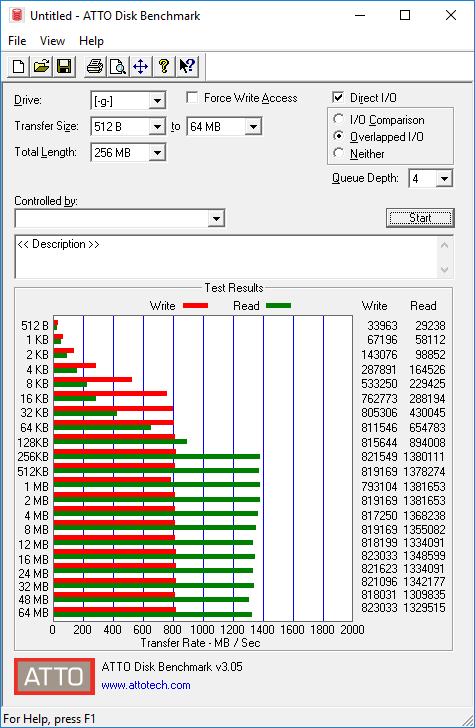 When it comes to the specification of the ADATA XPG GAMMIX S10, it does have a decent set of specification when compared to other equivalent drives in the market. The entry-level 128GB doesn’t fill all channels in the NAND flash chips and provides a reduced performance when compared to the 512GB and 1TB SSD models. Even though it comes packed with a PCIe 3×4 interface that can provide 4GB per second, it still doesn’t exceed even 2GB per second. Hence, you can’t find any guaranteed endurance levels in the packaging. And when it comes to warranty, the 5 year warranty is better when compared to other entry-level SSDs in the market.

When it comes to performance, based on our synthetic benchmark tests, the XPG GAMMIX S10 has been able to achieve near to the performance level as advertised in the packaging with the Read /Write hitting around 1350 x 828 Mb per second. Based on the CDM Benchmark tests, the scores close to that of the advertised 1800/850 MBps levels, even though the M.2 SSD is capable of hitting almost 4GB per second. Hence, you can say that the ADATA doesn’t advertise what that is not capable and has provided nearly similar speeds. But when it comes to copying data for real apart from our benchmark tests, it showed the tests slowed down a bit, but still a lot better than the SATA III SSDs.

When it comes to the heat levels, the M.2 SSDs showed little bit hot more than that of the SATA III SSDs, and when reached a limit of 70C, it starts to throttle. In cases of huge volume of copying and other tasks, the SSD began to throttle at 61C. But when you compare the maximum throttle limit, it is too good for an SSD.

ADATA have provided the XPG GAMMIX S10 in a very attractive package and one of the main features of the SSD is its exceptional heatsink. But one thing we don’t understand from the design point of view is that the logo is upside down when you mount on any standard M.2 slot. And when comes to throttling, the SSD proved exceptionally well during our tests. Even though the XPG GAMMIX S10 doesn’t even come close to the PCIe X4 bandwidth, it still offers outstanding performance when compared to other similar capacity drives in the market. But the SSD is priced almost $100 less than other equivalent models in the market.

The ADATA GAMMIX S10 comes with a 5-year warranty which is almost 2-3 years longer than similar capacity SSDs in the market. Overall, the ADATA XPG GAMMIX S10 provides excellent read/write capabilities, comes in a very attractively designed red/black package and also decently priced. We can surely recommend the SSD for gaming enthusiast looking for an entry-level SSD equipped with an M.2 2289 form factor.