Similar to older Call of Duty titles, Call of Duty: WWII have that same familiar FPS game movement we are all used to but without the fancy advance movement mechanics like double jumping and free running. The game has returned to the classic “boots-on-the-ground” gameplay, like in Counter-Strike titles where you locate the enemies and neutralize them.

The campaign mode in WWII is like a trip back into history, and at the beginning of the game you are already caught in an intense and fierce battle of that time during the beginning of D-Day. It has a well written plot that will lure you in and certainly keep you engaged through the whole story. While playing through the campaign, it is noticeable that the visuals in PC are spectacular especially in higher settings which gives highly detailed textures and realistic lighting enhancing your gaming experience. In-game you will be participating in all-out action fights, stealth missions and vehicle combat. I never felt bored while playing the campaign because of the well balanced mission setup. 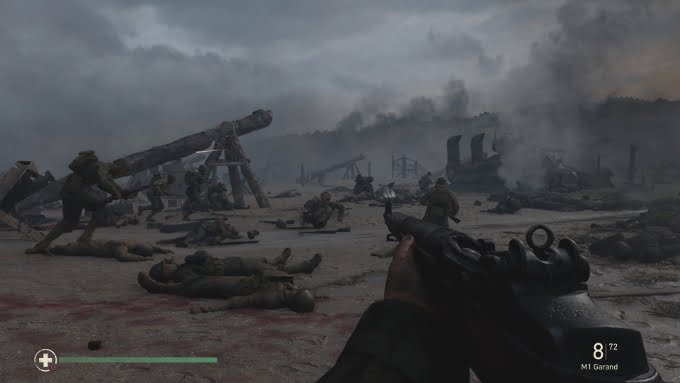 Playing WWII’s multiplayer mode is fun and fast-paced like its predecessors. In online multiplayer matches, players are assigned randomly either to Allies or Axis sides. Before your match starts, you are given a chance to select a Division, which the game implements instead of a create-a-class system. You are given 5 Divisions to choose from, each having different basic training, division training and weapon skills.

The 5 Divisions featured in the game are:

This system eliminates perks, and for you to be able to use other skills for your chosen division, you must play hard and level up. The game also introduced the new Headquarters mode, where you and other players can chill out. While inside this social space, you can watch others open loot boxes, use the firing range and do some friendly 1v1 matches with friends or other players. Your duel can be viewed by the rest of the players present within the same headquarters. It is a very fun mode to play in, especially with a group of friends. 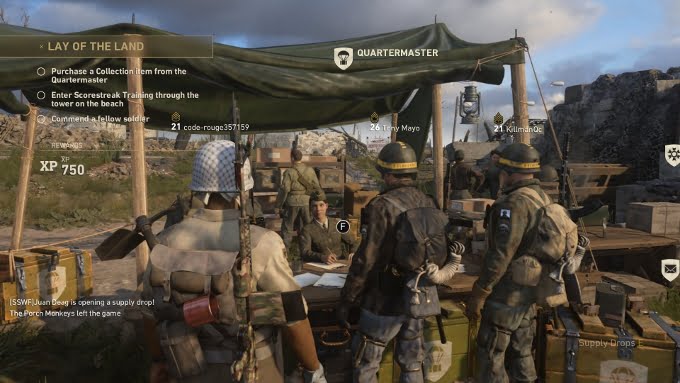 It is both an exciting and terrifying experience playing the Nazi Zombies mode. There will be plenty of jump scare moments where you will get spooked by zombies coming from unexpected places. For now there are two available maps where you can play in this mode, the insides of a house where your goal is just to survive waves and kill anything that tries to bite you. And a European Village littered with the undead where you must work with your team to survive the horrors and complete a secret weapon while solving puzzles to help you fight the zombie menace, and put a stop to it once and for all. In this game mode you can upgrade your weapons through an upgrade station that you must unlock before you can use it.

I recommend that you unlock the upgrade station to make your game progression much smoother and upgrading your weapon means you can do more damage, especially on higher levels where you have to fight against tougher, bigger and stronger zombies wielding a variety of destructive weapons like bombs, flamethrowers, and spike clubs with the intention of pummeling you to pieces and making survival for your team more difficult. Players can choose from four Hollywood voiced characters. A character class is also available where you can play as offense, control, support and medic. Each class have their own unique class skill which will increase the chance of your survival.

Each player can only hold a maximum of four perks. These perks can be purchased with the currency called jolts which are earned through defeating zombies. Players have the choice of purchasing bonus effects from five perk machines. Aside from weapon boxes where you could purchase your weapons, there are also mystery boxes where you can gamble your jolts for randomly generated weapons and special equipment. And do not forget to buy your armor since it is your only line of defense against the zombies, losing all your armor means death. Your life meter will regenerate but your armor will not. However, there is a perk upgrade which grants armor when you use a certain perk which is really useful.

And to wrap things up, I believe that Activision did a very good job in delivering Call of Duty: WWII to the gaming world. The return to WWII and the enhanced version of Nazi Zombies, which was now returned to its focus on horror is a welcome sight. With a lot of content available and ready for play, amazing graphics, tons of action and replay value I believe that players will keep coming back for more of this. This game series always delivers in many surprising ways.