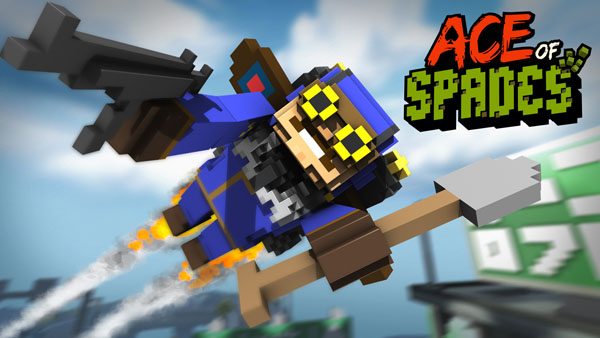 Launching on Steam on 12/12/12, Ace of Spades is a unique and retro-looking, intelligent shooter which deftly blends all the imagination and creative freedom of voxel-based gaming with the mayhem and excitement of competitive, team-based multiplayer first person shooters.

The game offers players complete strategic and creative freedom over a constantly evolving battlefield which, when combined with an extensive and ever growing weapon set, four diverse classes, a host of destructible maps and endless multiplayer experiences for 8 to 32 players, promises to breathe new life into the first person shooter genre.

In addition to the launch date announcement, Jagex also outlined details of the maps and gameplay modes which will be present in the game at launch. These will include:

· Diamond Mine: A race to mine and collect the most diamonds, the winning team being the ones with the most loot.

· Demolition: Destroy the enemy’s base before they have a chance to destroy yours.

· Occupation: Defend your base from the opposing team, then switch roles and try to plant a bomb in the enemy team’s base.

· Team Deathmatch: A tried and tested favourite in FPS games, get more kills than the other team and your team wins.

· Zombie Mode: All you have to do is survive the Zombie attack, if you get killed by a Zombie you become one yourself. Will you be the last one standing?

· Ranked Match: A tournament system which uses a selection of 4 different maps rotating every two weeks, to rank players competitively on a global leader board based on their performance.

$3 Million in Crowdfunding Collected for Crowfall

Commenting on the countdown to launch, Arash Amini, Producer for Ace of Spades said, “In Ace of Spades, we have created a game which seamlessly combines combat and construction gaming in real-time to create a truly unique experience. Players are equipped with the tools and abilities to craft elaborate fortifications, coordinated multiplayer assaults, and master stealthy and strategic battle tactics in their attempt to obliterate the enemy from the game.”

Amini continued, “We are so excited about the game’s release and we cannot wait to see how creative and deadly our players can be. It’s been really overwhelming to see the excitement grow since we announced the first details of the game last month. The response has been phenomenal and we have seen hundreds of thousands of players registering their interest on www.AceofSpades.com ahead of launch. The game promises to offer players an experience like no other, a hectic, destructive, intelligent and tactical form of gameplay which can’t be found anywhere else.”

Ace of Spades is the latest title from the multi-awarding UK studio behind RuneScape.com, the leading free-to-play adventure game, Carnage Racing, the recently released Facebook racing game, and the much anticipated Transformers Universe MMO.

Ace of Spades will be launching on Steam on 12/12/12 for £6.99. To enlist now head over to www.AceofSpades.com and register for updates.