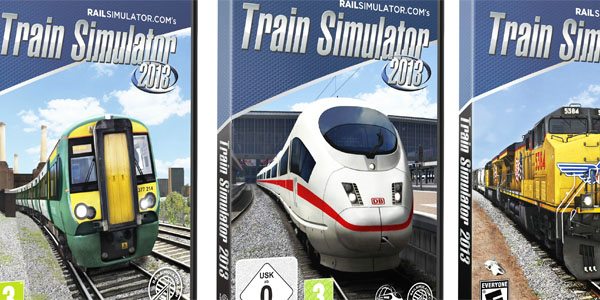 RailSimulator.com Ltd., the market-leading simulation developer, announced today that Train Simulator 2013 Deluxe Edition is now available worldwide via download on Steam. The sequel to the multi award-winning and best-selling Train Simulator 2012, the TS2013 Deluxe Edition includes the Sherman Hill route from Cheyenne to Laramie, Wyoming, as well as the London-Brighton line and the lively four-lane Munich to Augsburg route, complete with the superb ICE3 express train!

The Deluxe edition is available at a special discount until November 11, and a boxed version will also be available at retailers in the US, Europe and Australia this fall.

Train Simulator 2013 Deluxe Edition adds the Munich Augsburg route and ICE 3 train to the hit title. The Munich-Augsburg route often carries up to 350 trains each day. This highly-detailed recreation of the real line features stunning renditions of the stations and landmarks along the way, such as the impressive Munich Station (München Hauptbahnhof), and lower-level S-Bahn platforms beneath the main platforms. With new HP and KS signaling and many more real-world features, the Munich-Augsburg line offers hours of enjoyment in the cab for drivers everywhere. The included ICE3 train features operational LZB cab signaling and SIFA driver vigilance system.

TS2013 continues the unprecedented legacy set by the franchise by promising to be the most advanced train simulator in the world. Every aspect of gameplay and the in-game environment is designed to make the player feel like they are controlling a real locomotive. As well as a more immersive experience, improved graphics and additional content, new control options make the simulator easier than ever to operate. For the first time, Train Simulator 2013 will boast Microsoft Xbox 360® controller compatibility, enabling players to get away from their desks and drive in front of their TVs. Players around the world will also be able combine efforts to complete scenarios via Relay Play.

Also for the first time, Steam Workshop™ will be fully integrated into Train Simulator 2013, allowing users to create and share content with players from all over the world.