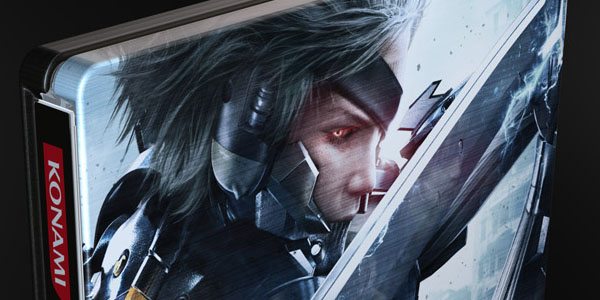 Konami Digital Entertainment GmbH has revealed it will release a Limited Edition of its eagerly-anticipated METAL GEAR RISING: REVENGEANCE title, which will be available to coincide with its February 21st/22nd launch and has outlined its pre-order incentives.

METAL GEAR RISING: REVENGEANCE arrives for PlayStation®3 and Xbox 360® next year, but demand for the new title is already huge. The new game has been co-created by Kojima Productions and PlatinumGames and marks the return of series favourite, Raiden. Four years have passed since the events of METAL GEAR SOLID 4: GUNS OF THE PATRIOTS, where gamers were introduced to the cybernetically-enhanced character. Since then, Raiden has reunited with his wife and son, and is content in his role as security agent for Maverick Security Consulting.

But when a mission to protect an African Prime Minister ends in the official’s assassination by augmented cyborg assailants, Raiden’s hopes for a quiet life are dashed and he is returned to the front line. Armed with his ‘High Frequency’ Blade that can cut through anything, he is charged with stopping the renegade private military company known as Desperado Enforcement – using any means necessary. Showcasing lightning fast action sequences, where players wield Raiden’s blade using an incredibly intuitive control system, METAL GEAR RISING: REVENGEANCE mixes the graphical finesse and fine story-telling of the METAL GEAR series, with the stunning gameplay that has cemented PlatinumGames as one of the leading producers of action games.

Thus, with Raiden taking centre stage in the new game, KONAMI’s European Limited Edition comes with a ca. 30cm figurine of the cyborg agent from the Play Arts KAI series. The Raiden White Armour figurine will only be available via this limited release, with just 25,000 units available across Europe for ca. 99,95 Euro. The Special Edition is available exclusively via Zavvi in the UK, and will also include a special DLC code to access the White Armour Raiden in the game, with an additional benefit that this incarnation enjoys an increased capacity to carry life-recovery items.

KONAMI has also announced two pre-order incentives, offering a choice of steelbook covers and unique DLC. The first features a Raiden illustration by METAL GEAR RISING: REVENGEANCE’s Character Concept artist, Yoji Shinkawa, and the DLC unlocks Raiden’s Inferno Armour, thus increasing the number of throwing weapons he can carry. This will be exclusively available via the GAME chain of stores when pre-ordered. The second steelbook is available when pre-ordered from independent stores and features a render of Raiden, and has a DLC code for the Raiden Commando Armour, which allows his access to a larger number of projectile weapons.