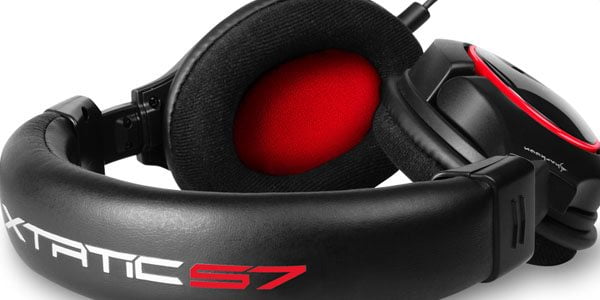 In addition, Sharkoon has replaced the previous USB2.0 cable for an included USB2.0 Y-cable, providing a stable energy supply to the headset via a second USB port for current or weaker sound sources.

The Sharkoon X-Tatic S7 also includes its predecessor’s proven features.
With its versatile Sound Control Unit and extensive cable set, the headset is designed for use on the Xbox 360 and PlayStation 3, and supports the voice chat feature on both consoles. But in addition to PCs, Notebooks and – in the absence of a USB interface with optional USB power adapter – DVD players, tablet PCs, smartphones and MP3/MPV players it also includes high-quality 40 mm neodymium speakers, a cable integrated amplifier and Dolby Headphone audio experience with a diverse sound options. The flexible, detachable microphone, the cushioned, rotating and pivoting ear cups, the adjustable headband and the more than four meter long cable ensure a flexible operation and a high-level of wearing comfort. On top of everything else, the color scheme of black with red applications gives the Sharkoon X-Tatic S7 an exciting look.