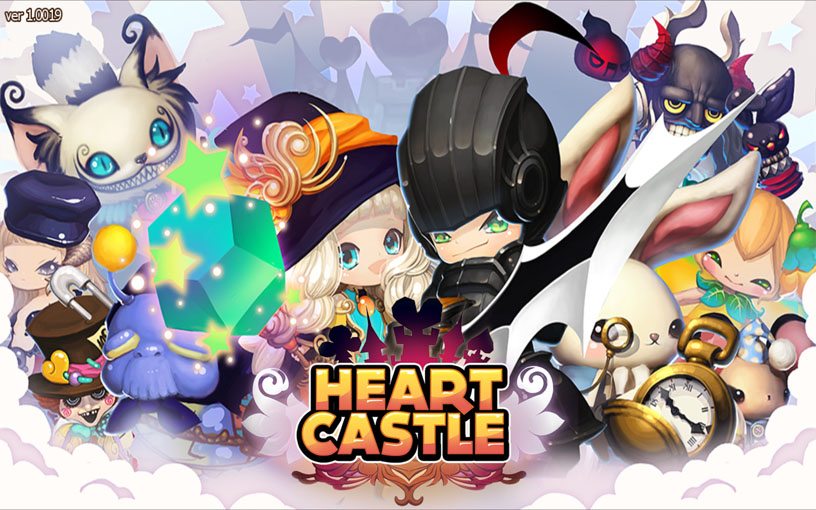 Heart Castle is an action-adventure role-playing game (RPG) created by South Korean game developer J2JLab. Based on the lore of Alice’s Adventures in Wonderland, Heart Castle sets players on a mission to uncover the mystery behind the spellbound creatures in Wonderland. Role-playing as a Warrior or a Wizard, players can bring along three other magical creatures (also known as pets) to venture the different game modes.
There are currently four game modes available in Heart Castle, ranging from Player versus Environment to Player versus Player game modes.

Story Mode: Following the back-story in Heart Castle, players explore the kingdom in search of Alice, who has gone missing. Players can also meet and team up with the familiar characters the Cheshire Cat and White Rabbit, with chances to capture and collect rare bosses and pets.

Dimension Hole: The Dimension Hole consists of timed quests in three difficulties – easy, normal and hard, where points will be granted via the completion of missions, placing players on a server-wide leader board.

Infinity Tower: Player can put the strength of their strongest party to the test in the Infinity Tower. Clearing each level in the tower unlocks the subsequent floor and allows players to advance up the mysterious tower, facing-off against tougher enemies and monsters.

Arena: Players interested in more competitive game play can take part in the player-versus-player battle arena. Pitting their best assemble of monsters against randomly picked opponents, players can battle for Arena points to climb up the leader board.

“We try to incorporate a variety of game features such that Heart Castle has all the bits that players love from popular mobile RPGS that will appeal to the needs of different players. For instance, casual gamers will enjoy the chapter-based game play while the more hard-core gamers will prefer to focus on managing the strength of their parties and climbing up the ranks,” said Hyeyong Lee, Head of Strategic Business from J2JLab.
“We are glad to have Heart Castle added to the list of mobile games we are publishing this year,” said Quach Dong Quang, Regional Product Director of Asiasoft. “Apart from Heart Castle we will also be launching more promising mobile titles developed from widely received PC games.  So I urge everyone to keep a close lookout for our upcoming releases.”

For more information on Heart Castle, be sure to follow Heart Castle’s Official PH Facebook page at www.facebook.com/HeartCastlePH