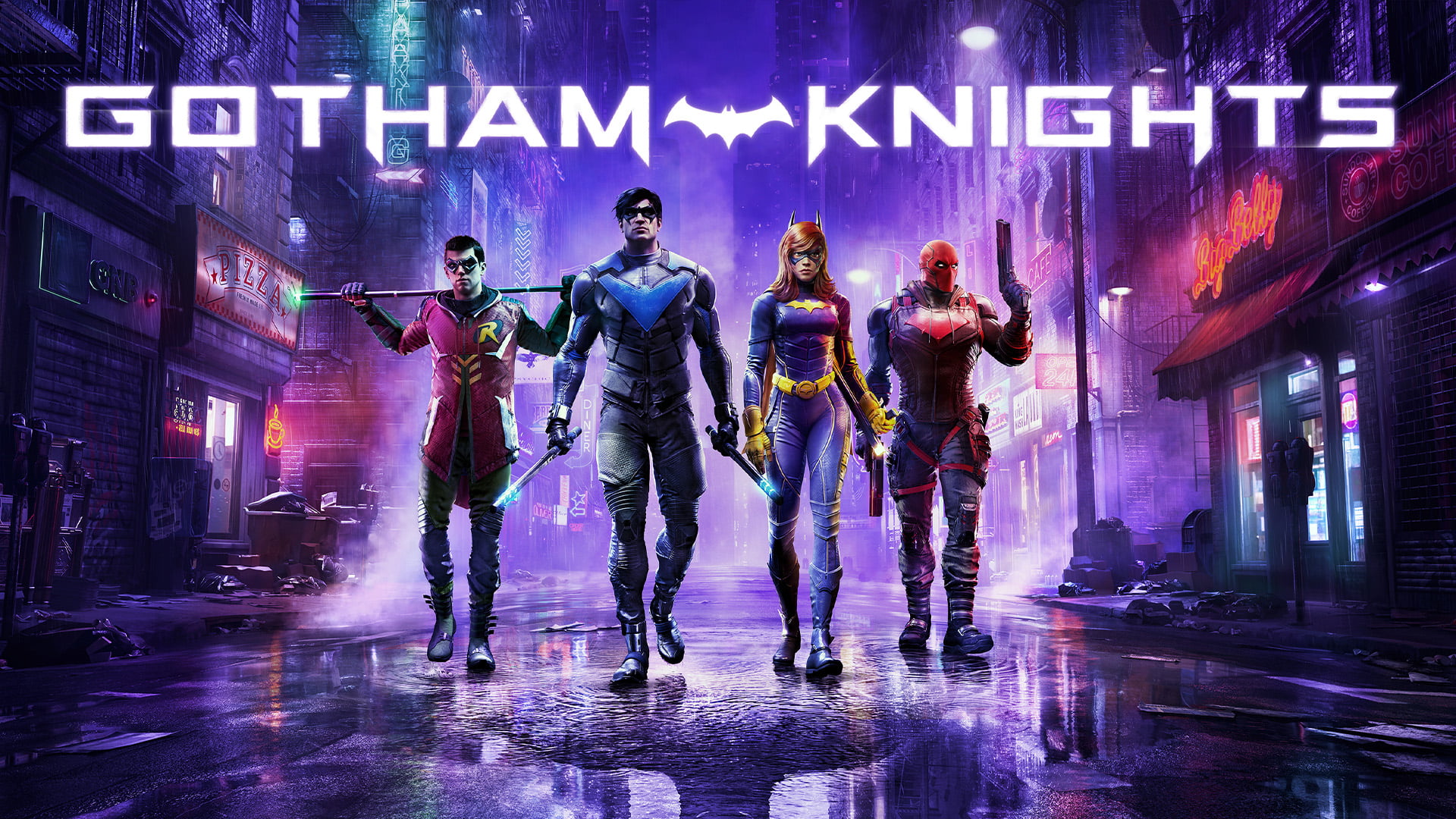 If you want to enjoy Gotham Knights, you’ll need to accept Batman’s death (an old foe kills him in the prologue) and the end of the Arkham series, arguably the best video game comic book adaptations ever done. Batman: Arkham Origins (2013) was the third game in the Arkham series, and WB Games Montreal developed it. However, with Gotham Knights, the studio has taken a new approach, focusing on leveling up and co-op as you investigate

Bruce Wayne’s death and uncovering a vast underworld conspiracy. Gotham Knights is an action role-playing game set in, you guessed it, Gotham City, where Batman used to live until a supervillain killed him. Since Batman has disappeared, it is up to his family—a quartet known as “The Gotham Knights”—to take care of day-to-day operations and reclaim control of the city from those who have taken advantage of the circumstance. Red Hood, Nightwing, Robin, and Batgirl are the four members of the Knights.

Whether gamers are grapple-boosting and swooping high above Gotham City’s buildings or speeding in the Batmobile and weaving through tight bends, the city’s lights and rain-soaked walkways are immersive, with detail spanning its whole skyline from island to island. The graphics of Gotham Knights are vivid and colorful. However, it is important to remember that Gotham Knights might do much better at this stage and could benefit from additional polishing to make it deserving of being exclusive to the next generation of consoles.

The game’s best attributes are the gameplay loop at the heart of Gotham Knights and the game’s representation of Gotham City. Because it is such an enjoyable game, many players may find it simple to ignore some little flaws because of how much they enjoy playing it. During the day, players will spend their time in the Belfry, where they will have the opportunity to advance significant story points, initiate new investigations into select villains, build new outfits and weapons, examine a variety of tasks, and communicate with the other members of their team.

In the evening, players wear the cowl and assume the role of one of the four main characters to go on a patrol through Gotham City. In this area, players are required to halt random crimes, locate and advance particular story beats, look for collectibles, and other similar tasks. After the players have committed all the crimes they can handle for the night, they head back to the Belfry to start the cycle over again. The reason that this strategy is so successful is that it highlights Gotham City in a positive light. The city is stunning, has an air of vitality, and is always bustling with activity.

Gotham City is an interesting generic world where players must accomplish a checklist of tasks, yet it masquerades as something else altogether. Players must complete a list of activities to progress through the game. Because the game is so good at spacing out its random actions around the area, players will never find themselves inundated with them. Players will be able to witness significant plot advancements on the map.

Still, to finish tasks like premeditated crimes, they will need to investigate random crimes, question adversaries, and unlock them first. Doing these relatively small activities builds “clues” that open new activities but requires players to go to the Belfry first. There are instances in which premeditated crimes can be unlocked on the same night they are committed, although this is rare.

The sheer range of combat you’ll face in Gotham Knights brings out the finest in the game’s gameplay. The players of Gotham Knights are urged to switch up their strategies between assault and ranged weapons, master their ability to dodge, handle the elemental effects and specialized builds for their characters, and occasionally deal with auxiliary difficulties such as bombs, defending points, and so on.

Additionally, certain foes are exclusively weak strategies, which adds a layer of diversity to deal with these or numerous factions. This might put players at a disadvantage, particularly if they are using a hero they haven’t specialized in a particular way. Yet, it is satisfying to be able to overcome these challenges. The battle system in Gotham Knights is exciting, addicting, and aesthetically pleasing. At the same time, the game’s metropolis is not only the most impressive rendition of Gotham City to date but also a model for how to sequence open-world activities.

Gotham Knights as a game is incredibly forward-thinking in its design. It boasts several key cutting-edge features, including ray-traced reflections, displayed prominently throughout the game. Additionally, it promises support for ultra-wide monitors, 4K resolution, as well as ultra-high frame rates. In addition to supporting Intel’s Xe Super Sampling technology, Gotham Knights incorporate the DLSS 2.0 and FSR 2.0 upscaling technologies developed by Nvidia and AMD, respectively. Fans who are particularly observant may get a glimpse of the Pcs settings menu, which appears to contain choices for Dynamic Resolution as well as a Field of View slider. WB Montreal showed a fast comparison swipe across three distinct graphic settings.

Gotham Knights seem to be a step in the right direction for players on a personal computer. Throughout history, the Batman video games and their respective PC audiences have not had the ideal relationship. The most notable example is Batman: Arkham Knight, which saw one of the worst PC ports. As a result, the game was even removed from Steam until another development firm could fix it. The fact that WB Montreal has supported ultra-wide monitors in addition to including the full lineup of upscaling innovations from Intel, AMD, and Nvidia demonstrates that the studio was well prepared for a diverse range of possible PC configurations and placed emphasis on performance as it nears completion of Gotham Knights.

Invisibility, and teleportation, which uses technologies from the Justice League’s satellite, are two of the other extraordinary qualities incorporated in the game. A possible reference to Carrie Kelly, the Robin who appeared in Frank Miller’s Batman: The Dark Knight Returns, Robin is armed with a slingshot in addition to his staff in this character variation.

The sound in Gotham Knights is one of the aspects of the game that any player will adore. They did an excellent job of adapting the music they played to the various settings by including a variety of musical styles. Rock & roll music continues to play from the Freaks’ speakers as you engage in battle with them. The Freaks are one of the most powerful gangs in Gotham. In the meantime, when you are completing a task against an adversary such as the Penguin, you will most likely hear more of a “regular” Batman-style score.

There is a Harley Quinn quest that you complete early in the game. This objective has you pursuing something, culminating in a boss battle. A Pop-Punk rendition of “Livin’ la Vida Loca” plays while that fight is going on. Although it is not the typical score, it is a wonderful addition. It demonstrates once more that they grasp the general atmosphere of the rogue’s gallery as well as Gotham in general. Using a bat cycle to get around town while listening to some great tunes is a winning combination.

The astoundingly unique sound design subsequently binds Gotham Knight’s aesthetics together. It gives a superb performance that is brilliantly stereotyped, with powerful sound effects and soundbites, as energetic and upbeat music. In addition to that, the acting is excellent. The overall quality of the finished product is improved thanks to the flawless performance of each player. The bustle and activity of the city are other fascinating aspects. The fast-paced and wild action is brilliantly contrasted with the hustle and bustle of ordinary life. Although it was only a little feature, it played a role in bringing a vast universe to life.

The Gotham Knights storyline is an “all-new original” tale completely independent from the best Batman narratives and the best Batman games. This ensures that the Gotham Knights story is unique. The game’s creators at WB Games Montreal have created a universe in which Bruce Wayne has been killed, which has led to the spread of a vast criminal underworld throughout the streets of Gotham City. Gotham Knights’ head designer Patrick Redding told GamesRadar+ that the development team “drew on the concept of the Batman Family” for the game. Therefore, players can play as Batgirl, Nightwing, Red Hood, and Robin as they take on the Court of Owls and some of the greatest Batman foes in the franchise’s history.

The protagonists of Gotham Knights travel through an open-world rendition of the city of Gotham, which, as the plot of the video game progresses, undergoes various transformations and becomes increasingly dangerous. Cutscenes also unfold differently based on which of Gotham Knights’ unique characters is picked. Additionally, there are unique Gotham Knights Villain Night events that charge players with preventing Batman’s rogues’ gallery from modifying the game environment in potentially devastating ways.

It will take you approximately 20 hours to complete the story mode in Gotham Knights, although this time will differ based on how you choose to play the game. Since this is an open-world game, the amount of time you spend in Gotham City is determined by the amount of exploration you do. In addition, minor antagonists and recurrent side missions must be accomplished on a nightly basis to clear Gotham City of all criminal activity.

The excitement surrounding Gotham Knights, which has made it among the most highly anticipated of 2022, has surely set the bar even higher. When a new game is created featuring what is perhaps the most-beloved DC universe, fans will come into it with extremely high standards. When it comes down to it, fans are the ones who must pick which aspects of Gotham Knights important to them the most to determine whether they want to buy it.

Gotham Knights Review – Meticulous yet Effective RPG
Conclusion
Gotham Knights live up to the expectations as one of the most anticipated games in 2022.
Positive
All-new original tale completely independent from the best Batman narratives
Sheer range of combat mechanics
Negative
Some missions in open-world are repetitive
4.5
GAMEHAUNT SCORE
Where to Buy
SteamAmazonEpic Games