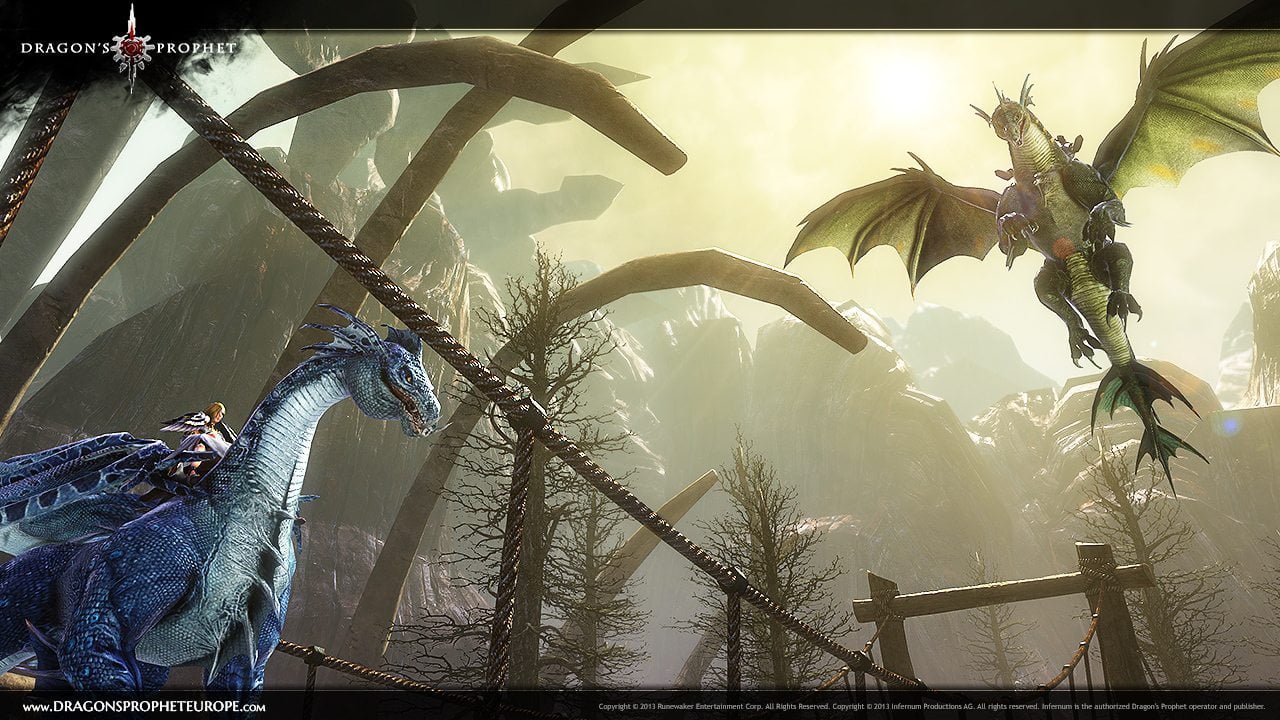 Infernum Productions AG and Sony Online Entertainment LLC (SOE) announced last night at the annual SOE Live fan event that the F2P MMORPG Dragon’s Prophet will launch in Europe and North America on September 18th 2013. The fantasy MMORPG from the developers of Runes of Magic combines all aspects of a modern role-playing game and evolutionises the genre. With more than 300 unique dragons, players can experience adrenaline fuelled moments in capturing legendary dragons, and then customise the dragons to how they see fit. Currently, Dragon’s Prophet is in Open Beta and already enchants hundreds of thousands of players. During the current Open Beta phase, the regular improvements, updates and adjustments are illuminating the game in new splendour. When the game launches, players can attend massive, cross-server PvP battles with siege weapons thanks to the introduction of the frontier system.

“Thanks to the help of thousands of passionate beta testers and the tireless efforts of everyone involved, we are now close to the next milestone in Dragon’s Prophet”, says Andreas Weidenhaupt, CEO at Infernum Productions. “Almost three months after the open beta started, we have already made huge progress! After we revisited the existing gameplay systems on a huge scale and delivered new content to Dragon’s Prophet, we will now continuously improve the performance, address balancing issues and rework all zones as well as the 30 dungeons we already released. When the game launches, we will deliver an additional zone as well as the long-awaited frontier system with its epic cross-server PvP battles. Gaming has never been this diverse and thrilling – and you’re experiencing it on the back of a mighty dragon!”

“Dragon’s Prophet has brought together what every fantasy-MMO gamer looks for in a new game: intense, action-based combat, a unique and compelling end-game siege system, and of course, hundreds of dragon types to interact, befriend and ultimately customize your play style with,” said John Smedley, President of Sony Online Entertainment. “Open Beta has provided us with valuable player feedback. We have been working closely with Runewaker and Infernum to refine the game and add unique, compelling content to ensure Dragon’s Prophet globally launches as a scorching, high-quality online entertainment experience.”

Changes during the Open Beta:
· Skill balancing and revision of the attributes of all classes
· Redesign and extension of the interface for improved handling and overview
· New items and revised loot, stats and attribute systems
· New Dragon Chamber that offers space for up to 96 additional dragons
· Complex and motivating achievement and title systems with character bonuses
· Sandbox-based housing in the frontier as well as the introduction of citadels, keeps, outposts and crystal towers in the PvP Citadel system that allows for massive, cross-server siege battles between alliances or guilds
· High Lord system that lets you control whole territories
· Mounted Combat – Fight from the back of your dragon and support other players on the ground, in the water and way up in the sky
· Revised survival difficulty mode for the dungeons
· Complete revision of all zones and dungeons
· New Dragon Sanctuary including an altar of sacrifice allowing guilds to summon particularly rewarding enemies
· Introduction of world bosses
· Revised dragon companion AI
· New pets that can collect loot
· Performance improvements through detection algorithms and engine improvements
· Cross-server account features
· Introduction of an in-game browser
· New styling interface
· Improved main storyline
· Introduction of dungeon events
· Restructuring and implementation of bosses as well as the general monster AI

“Since entering Open Beta earlier this year, SOE and Infernum have created a strong, engaging relationship with their respective Dragon’s Prophet player communities,” said Tony Tang, founder and VP Business Development at Runewaker Entertainment. “From their years of experience in delivering innovative, engrossing games, both companies have provided us with expert advice during the development of Dragon’s Prophet. We are confident that Dragon’s Prophet will see global success at launch.”

General features of Dragon’s Prophet:
· Deep background story that players can follow from three different starting areas
· Eight adventurous zones offer everything from sap green meadows to deadly deserts to frosty glaciers
· Four classes with extensive specialisation options through class skills, masteries and the use of dragons
· More than 2,000 quests
· Grand cities that serve as hubs between adventures
· More than 30 challenging dungeons with multiple difficulty settings and bosses
· More than 300 breathtaking dragons that now only serve as mounts but also assist the player in combat
· In-depth interaction with your dragon: Training, leveling, skill-exchange and gathering
· Action based combat system with numerous combo attacks
· An ever improving number of currently 50 unique dragon skills
· Floating Islands, apartments and private islands allow players to build their houses the way they want
· Regular in-game events
· Complex crafting system including item improvement and dragon shard system