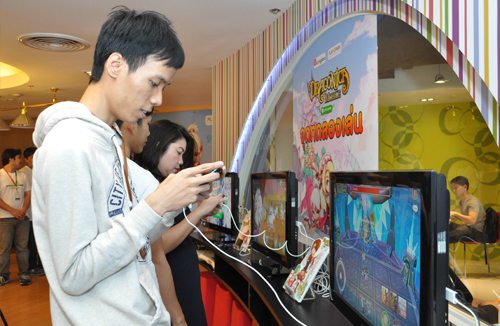 Asiasoft Corporation Public Company Limited (“Asiasoft”) has announced a partnership with LINE Corporation (“LINE”) to launch a new game, LINE Dragonica Mobile, the mobile version of the highly popular PC game, Dragoncia. LINE Dragonica Mobile is slated for launch on iTunes and Google Play in May 2015, and will be available in Thailand, Singapore, Malaysia, Vietnam, Indonesia and Philippines.

“As the leading online games publisher in Southeast Asia, Asiasoft is always seeking out the best games and entertainment services for our gamers. There has been more than 18 million gamers who have played the PC version of Dragonica and we can’t wait to release LINE Dragonica Mobile with one of the top leading smartphone platforms, LINE,” said Deputy Managing Director of Asiasoft, Miss Siriratt Waisarayutt.

“There are more than 33 million LINE users in Thailand and we now have more than 44 active game titles, and a total of 518 million downloads around the world. We are glad to be able to work with Asiasoft, the number one online entertainment service provider in Southeast Asia, to add LINE Dragonica Mobile to the list of available games in LINE. It will be a good chance for LINE users to enjoy an role-playing game which can be logged in using LINE from their mobile devices.” Mr.Krispol Laijongrak, Manager of LINE’s Thailand Games and a representative from LINE Thailand said.

“We will be coordinating with our offices across Southeast Asia to develop solid regional and local strategies to market the game with LINE to give LINE Free Coin for users in 6 countries in Southeast Asia. We plan to run both digital and offline campaigns across all media channels to promote LINE Dragonica Mobile.” Miss. Wansika Chuachatchai, Assistant Marketing Director of Asiasoft, added.