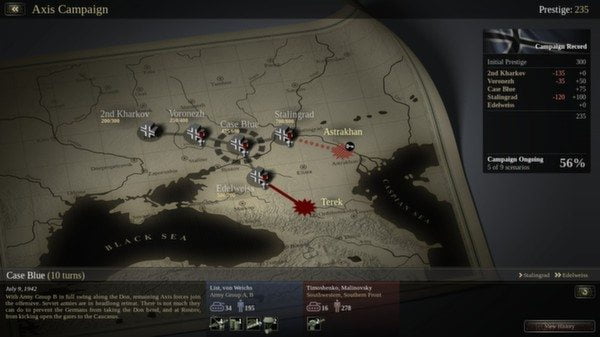 Unity of Command now on Steam and DLC

Unity of Command is now available on Steam and will be sold for the discounted price of $14.99 during its first week ($19.99 after that). Developers have also announced a new DLC, to be released before the end of this year.

Zagreb, Croatia – October 18, 2012 – Independent game developers 2×2 Games have announced that their turn-based strategy game for the PC, Unity of Command, is now available on Steam. The Steam edition of Unity of Command will be sold at the discounted price of $14.99 during its first week of release ($19.99 after that).
http://store.steampowered.com/app/218090/

2×2 Games have announced that Red Turn, the game’s first DLC, will be made available before the end of 2012. “Red Turn: The Road To Berlin 1943-45” follows the historical Red Army offensives to defeat Nazi Germany, putting the players in command for the second half of The Great Patriotic War.

The main part of the Red Turn DLC will be the gigantic Soviet campaign game, consisting of 17 scenarios. On top of that, there will be 2 standalone German and 4 multiplayer scenarios, for a total of 23 – more than in the original game (which had 20 scenarios).