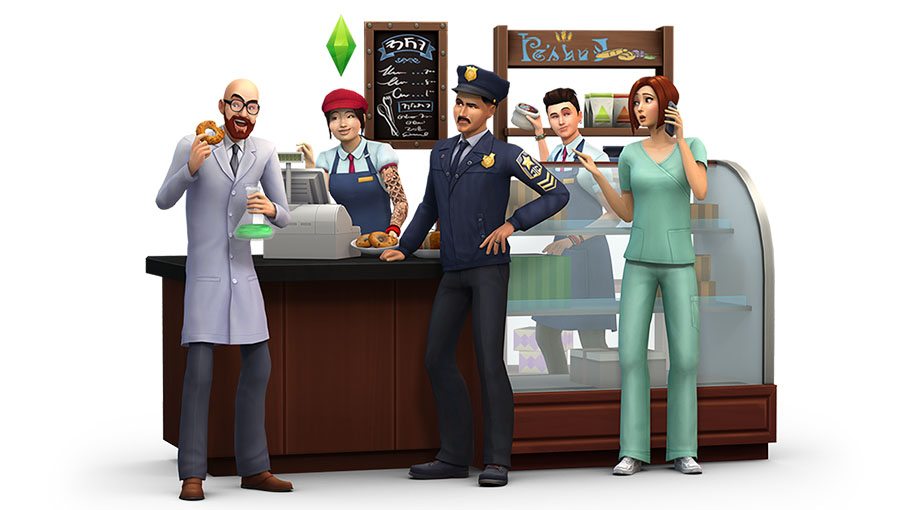 The Sims 4: Get to Work Review

Sims 4: Get to Work is The Sims 4’s first expansion pack. This expansion pack includes three new career paths and an option to open retail establishments in the Sims’ neighborhood. Previous reincarnations of this expansion pack were Sims 3: Ambitions and Sims 2: Open for Business.

Gameplay for the Sims 4: Get to Work lets Sims become doctors, scientists, or detectives, by starting from the bottom of the career ladder and gradually completing tasks in order to fill up the progress bar and get promoted. Players have the option to follow their Sims to work, or let go of following the career path altogether.

The Science track is the most exciting career tracks in the Sims 4: Get to Work. Scientist Sims brainstorm and make use of the Invention Constructor, which helps Sims’ inventions come to life. Sims also get to try out potions and dangerous substances, which help spice up their career. As the Sim’s career progresses, they will be able to invent the Simray, which does simple things at first, like freeze other Sim’s minds.

Progression in the career track will eventually have the Simray do increasingly amazing things such as mind control, which will fascinate the Scientist Sim and scare other Sims in the game. The Scientist’s end goal in the career track is to interact with alien life. Once the Sim invents the ElectroFlux Wormhole Generator, the Sim will then be able to reach Sixam, which is the alien planet in included the Sims 4: Get to Work.

The Medical track lets Sims begin as a Medical Assistant and the tasks begin to increase in difficulty as the career level goes up. Players will eventually be able to receive house calls and give scans to patients. They can also unlock new social interactions, such as the cheeky “Check for Fever” in order to flirt with Sim patients. One of the bigger allures of the Medical career track is that Sims will eventually be able to give birth to full-term female Sims and even male-impregnated aliens. This career track has the most diversified tasks in the expansion pack.

The variety of tasks that need to be done in the Medical career path guarantee that players will have extended enjoyment and gameplay with Sims 4: Get to Work. On the other hand, however, the hospital setup in this game isn’t similar to what it’s cut out to be in real life: the absence of a crowd and the lack of tension that comes in a normal hospital is lacking in the experience of playing the game.

The third and final career track players get to have in Sims 4: Get to Work is the detective track. This career track is much different from the first two in that players may get bored with this easily. Just as in real life, the tasks in detective work have a tendency to become repetitive: build crime maps and look for evidence. The career progression lets Sims arrest and interrogate suspects. Arresting the wrong person has massive impacts on players’ career performance, which is similar to real-life situations. 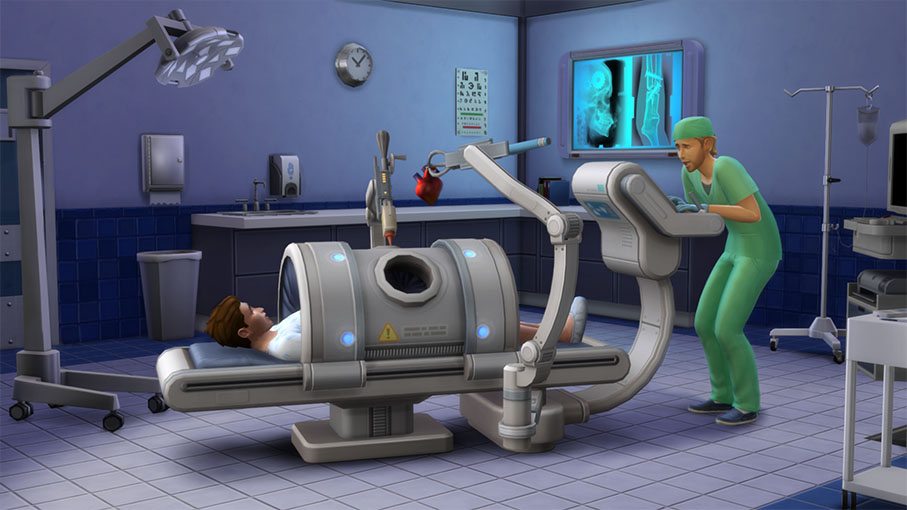 An additional surprise for Sims 4: Get to Work is that players can now customize aliens in Create-A-Sim since Sixam will exist along with this expansion pack. There are a variety of skin tones and makeup options that may seem unnatural for some players, but have actually been built for this purpose.

The final offering for Sims 4: Get to Work is the Sims’ option to build retail establishments, which can sell anything the player may choose. Players have the option to purchase a pre-made lot or build their own store from scratch. The main difference in building a business is the absence of a career track, and Sims that own a business eventually do run it like they are the boss: working long hours, hiring up to three employees to keep the business up and running, and making sure that all items are well-stocked.

Sales in the retail option are dependent on the employees’ interaction with prospective customers, and sales are done through a tablet instead of the standard cash register. Add to that the usual additions in expansion packs: new costumes, makeup, and four additional lots for retail spaces, and you have the entire expansion pack in your hands. 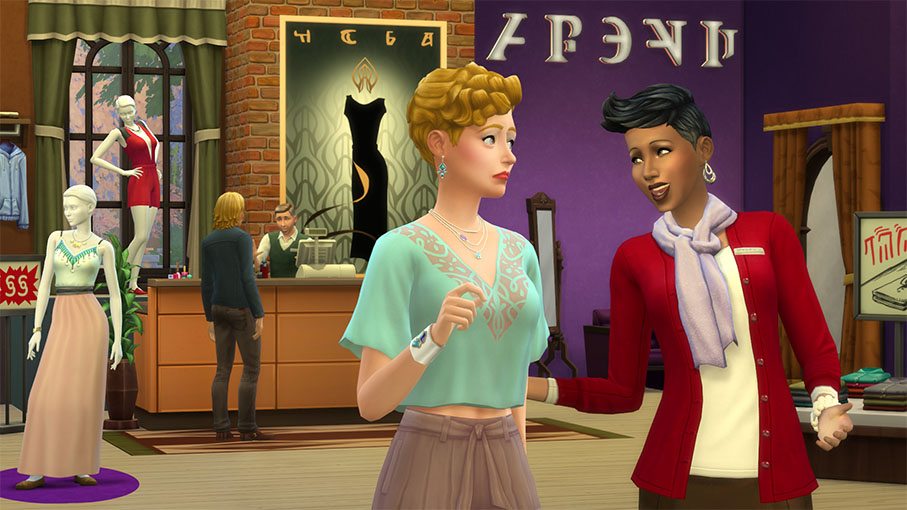 One of the downsides in Sims 4: Get to Work is the need for more career paths, because apart from the three listed above, there isn’t much else to do. The lots added to the expansion pack are also little in comparison: there are four additional lots for the retail option in the game. Apart from this, the retail offering in this expansion pack pales in comparison to the Sims 2: Open for Business, which offers more legroom for players to run a business and lets them have social interactions that are no longer available in this expansion pack.

Nonetheless, the details taken in making each of the three career paths as realistic as possible, and the smaller details that are added to the game are worth the money players pay for in this expansion pack. The visual and the audio are once again at par with the base game of the Sims 4, and each franchise of the Sims has evidently been better and better ever since the first edition of the Sims. 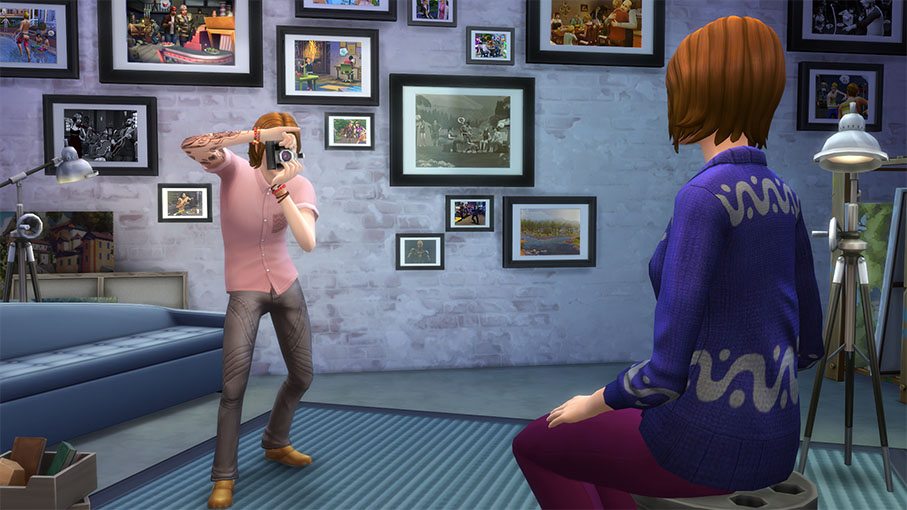 Overall, Sims 4: Get to Work is worth the purchase. There’s still a bunch of speed bumps that need to be tackled with this expansion pack given that it’s the first one EA rolled out for this franchise, but the additions it offers entice old and new players to keep playing this long-time favorite game. Each career path, in itself, is quirky and funny, and will keep players on their computers for hours.

EA has gone a long way from the first version of The Sims, and they gradually improve all aspects, from the visuals and audio, to ensure that players continue to have fun with the most well-known life simulator games for PC and Mac. Hopefully the next expansion packs for The Sims 4 will be just as exciting—if not even better—than Sims 4: Get to Work.