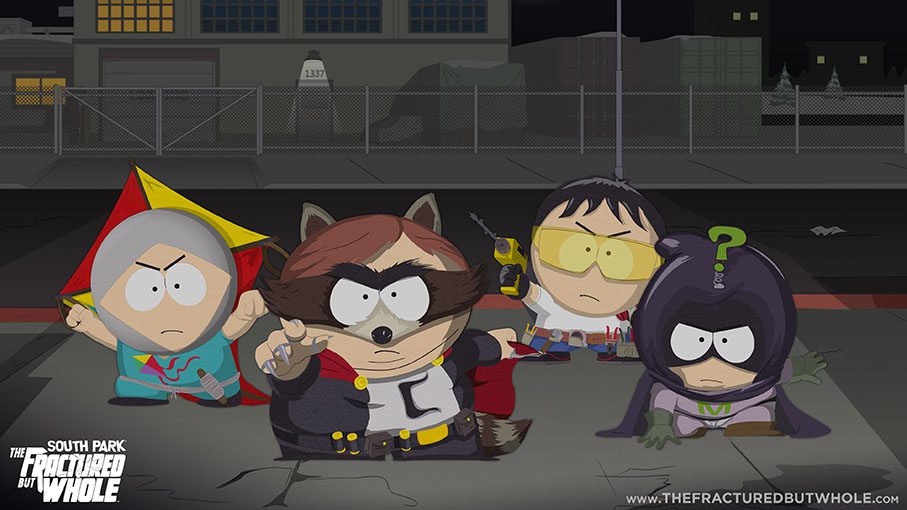 Today, at the Electronic Entertainment Expo (E3), Ubisoft® and South Park Digital Studios announced that South Park™: The Fractured but Whole™, a sequel to 2014’s award-winning South Park™: The Stick of Truth™, is currently in development. Players will once again assume the role of The New Kid and join South Park favorites Stan, Kyle, Kenny and Cartman in a new hilarious and outrageous adventure.

Developed by Ubisoft San Francisco, South Park: The Fractured but Whole will enable players to delve into the crime-ridden underbelly of South Park with Coon and Friends. This dedicated group of crime fighters was formed by Eric Cartman, whose superhero alter ego, The Coon, is half man, half raccoon. As The New Kid, players will join Mysterion, Toolshed, Human Kite, Mosquito, Mint Berry Crunch and a host of others to battle the forces of evil while Coon strives to make his team the most beloved superheroes in history.

Ensuring another truly authentic South Park experience, creators Matt Stone and Trey Parker are involved in every step of the development of the game.

“The success of South Park: The Stick of Truth proves our fans crave a deeper interactive experience with South Park,” said Dan Yang, EVP and GM, Consumer Products, Viacom Music & Entertainment Group. “Working with Ubisoft to extend the South Park gaming franchise will no doubt galvanize the audience’s interest across all platforms.”

“By successfully mixing outstanding comedy with excellent gameplay, South Park: The Stick of Truth created a game genre: the Comedy Role-Playing Game,” said Laurent Detoc, president at Ubisoft. “Our teams worked hard, laughed hard, and players loved it so we’re back to collaborate on the fantastic world created by Matt, Trey and the talented group at South Park Digital Studios with South Park: The Fractured but Whole.”

South Park: The Fractured but Whole will be available for Xbox One, PlayStation®4 computer entertainment system and Windows PC.