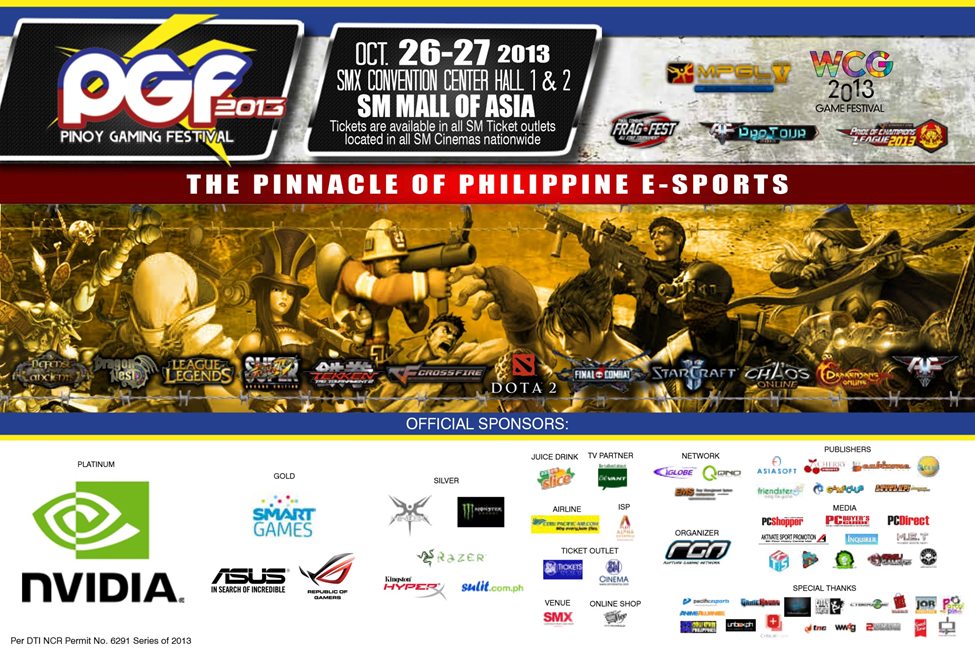 RapturePH returns with the third installment of the Pinoy Gaming Festival (PGF) that will be held on October 26 – 27, 2013 at the World Trade Center Hall B & C. The annual electronic sports (e-sports) event, which debuted in 2010, has grown to be the one of the most anticipated e-sports event in the country.

This year’s PGF is anticipated to draw the highest number of attendees as compared to the last two PGF’s. This prompted the organizers to accommodate more space for the venue, which will now be held in two SMX Convention Center Halls. Ten game titles are confirmed to be featured in the two day festival, namely: Assault Fire, Crossfire, Dota 1, Dota 2, Dragon Nest, Final Combat, League of Legends, Starcraft 2: Heart of the Swarm, Super Street Fighter 4: Arcade Edition, and Tekken Tag Tournament 2. The PGF  2013 event will also serve as the WCG 2013 Philippine National Finals venue for Assault Fire, Crossfire, Starcraft 2: Heart of the Swarm, and Super Street Fighter 4, which will be held at Kushan, China on Nov. 28 to Dec. 1 , 2013. Last year, a total of 40 countries have participated in this prestigious e-sport event. The Philippines Crossfire team was able to secure a bronze medal at the World Cyber Games 2013 Grand Finals for the Crossfire E-Sport competition. They lost to the Chinese team at the semi finals. But they were able to bounce back and beat the Russian team to secure the 3rd place finish. This is the very first time our nation secured a medal at the WCG Grand Finals which was highlighted by the interview of one of the world’s most respected and well known journalist and public figure in the country (and the world), Mr. Mike Enriquez.

In congruence with the multiple game competitions are other highlights such as: Mineski Pro Gaming League Philippine Finals and cosplay competition. PC rig building/customize, multiple freebies and prizes are to be given to lucky attendants as well. Cosplay goddess and celebrity Alodia Gosiengfiao will also be going on Oct. 26, 2013 (Day 1) and will be at the Razer booth along with Mr. Min-Liang, the co-founder, CEO and creative director of one of the most well known esport brand in the world, Razer.

Connect with Ubisoft Philippines at ESGS 2016

Tickets to the PGF 2013 event are priced P160 each and are available in SM Ticket Outlets located in all SM Cinemas nationwide. RapturePH announced that tickets are currently being sold limited to 4000/day to avoid overcrowding. For more information on the Pinoy Gaming Festival 2013, please visit the Pinoy