The Walking Dead: Road To Survival Is Unique

Scopely initially released this strategy role-playing game some time ago, so this isn’t exactly brand-new. However, it’s stood the test of time as one of the more popular apps in its genre, and thus deserves a little bit of attention.

Based on the hit AMC television series The Walking Dead (and the comics that gave way to the series), the game is designed as a role-playing survival adventure. While it’s set in the dark and often unpredictable world of the show, the story is entirely original. Your task is to band together with fellow survivors after a zombie apocalypse and form an alliance with the town of Woodbury. As a brutal tyrant rises to power there, however, you suddenly face threats from all angles. You then have to fight and strategize even more intelligently to get by.

What makes the game unique before you even start playing is that it’s actually surprisingly uncommon to see modern video games based on hit TV series. There are a few exceptions out there and, oddly enough, they’re highlighted by popular British soap operas like Emerdale and Coronation Street. Both shows have inspired some of Gala Bingo’s most popular bingo rooms online. It’s a curious mix of old and new, combining decades-old soap operas with the latest in online casino gaming, but the shows naturally serve as appealing backdrops and settings for bingo rooms catering to players of all ages.

More along the lines of The Walking Dead, HBO’s Game Of Thrones is the other current TV show most likely to produce a meaningful game, and there have been a few attempts. Telltale Games has produced an episodic series for consoles, as what’s likely the most noteworthy foray into Game Of Thrones-based gaming. Incidentally, the same company made its own game based on The Walking Dead as well. 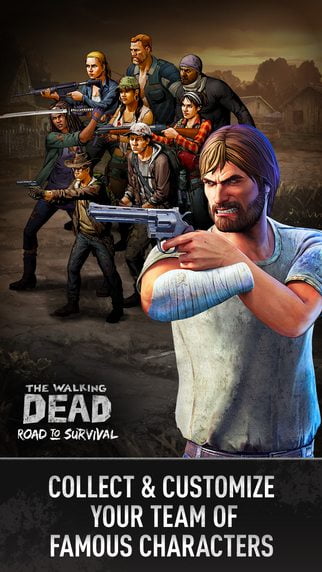 But The Walking Dead: Road To Survival does what no other TV-based game has really accomplished: it uses its subject matter as more than a background or basic setting, yet still composes a captivating original narrative on a format that allows it to be downloaded in seconds. It’s exactly what a lot of TV fans might be looking for with regard to their favorite shows: simple and familiar, but engaging and original.

There simply isn’t a TV game out there that allows you to dive so fully into a series. In The Walking Dead: Road To Survival, you have a virtually limitless capacity to make decisions that will impact your direction while you’re playing through a set narrative. Through collecting characters (some of whom are recognizable from the show), upgrading your team, building and maintaining a base, and of course fighting the walking dead (and survivors who go against you), you pretty much get the full experience. And for those looking for something beyond the core story elements, there are various options for engaging in online competition through the game.

In Battlefield 1, No Battle Is Ever The Same

It’s all done through a well-crafted RPG gameplay format and with graphics that almost look hand drawn and capture the spirit of a Walking Dead comic book. If there’s a drawback to the whole experience it’s that (like so many other games these days) it does favor those who are willing to spend some cash on in-app purchases to improve their teams and speed up the process. However, spending money is by no means required to enjoy the experience.

With all things considered, it’s probably the best of several games based on The Walking Dead, and likely the best TV-based game you can find.