Calamity Trigger launched the BlazBlue franchise into superstardom with its unprecedented gameplay depth and plot. Continuum Shift kept it there with its refined elements and new modes. Chrono Phantasma pushed things farther with new fighting mechanics. Now, ARC System Works gives us BlazBlue: Chrono Phantasma EXTEND, the latest in the BlazBlue series and a “revision” of its immediate predecessor. With more characters, scenarios, chapters, and supported consoles, the franchise still burns brightly amidst lackluster sequels from other titles.

Fans of the BlazBlue series who have been there from the beginning will surely feel a heavy familiarity. After all, despite all the changes, it is still essentially the same game. There are even some changes that might feel a tad too repetitive, such as the addition of the new character Lambda No.11 — despite being a separate character, the appearance and fighting style seems to be reminiscent of Nu No.13. The other new character, on the other hand — the robot-wielding Celica A. Mercury — is an interesting addition with a powerhouse offense. 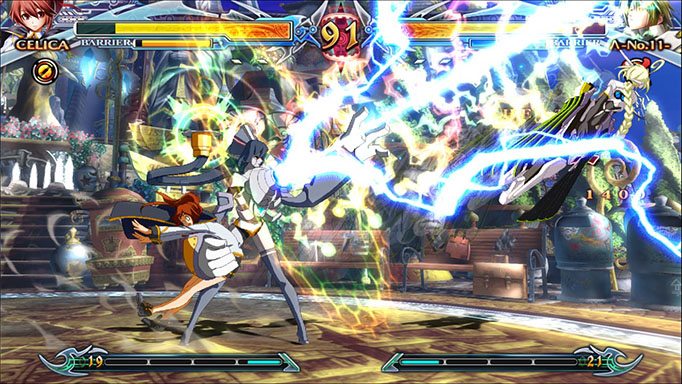 The visuals have also improved, though the maker has not taken a single step away from the familiar anime-style design. This seems to be a make-or-break point for many still waiting to get into the game, especially as most other franchises have already moved to full 3D rendering. Despite turning off some players, many have likened the visuals to popular visual novels — and with its believable story, the game delivers.

By taking advantage of current-gen consoles (PlayStation 4 and Xbox One), the game looks better than it ever did before. On the audio category, Chrono Phantasma EXTEND gives three new battle themes (two for the newcomer characters, and one non-remixed theme for the devious Terumi). 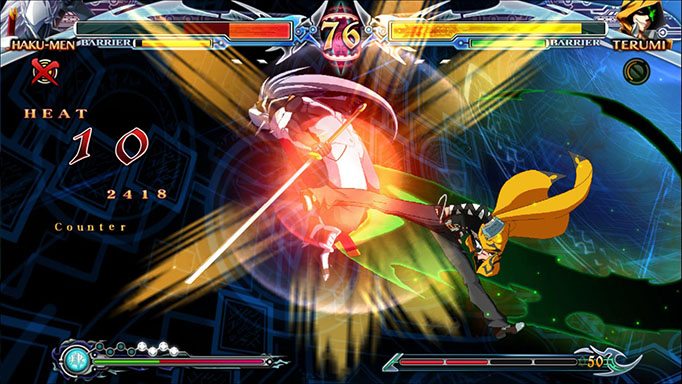 The Stylish Mode introduced in Continuum Shift is still there, with newbie-friendly controls for those trying the game out for the first time. For the vets, there is a new Guard Gauge system that allows players to deliver a guard-crushing blow when the opponent’s barrier-gauge is low. This adds another layer of strategy to the already-acclaimed BlazBlue gameplay, blending in perfectly with previous innovations such as Overdrive and Crush Trigger. Character rebalancing, paired with the reduced hitstop of the original Chrono Phantasma make for fast-paced and entertaining skirmishes. And of course, each character has a very unique and specific fighting style that needs to be mastered for maximum fun. One simply cannot go all Konoe on the controls while wielding Celica — even if they are sisters.

In terms of new content, the additional gameplay is immersive (though it can be a bit confusing for those who have not followed the previous storylines) and adds tremendous replay value what with new plot devices and character-specific chapters. Those seeking more information about the game’s massive universe can refer to the handy Library Mode (or the new chibi segment “Teach me, Miss Litchi!”), while those seeking extreme challenges can treat themselves to the revamped Unlimited Mars Mode. Be warned, though — Unlimited Mars’ difficulty setting is harder than the Hell difficulty, requiring lightning-fast reflexes beyond that needed for other fighting games (like Marvel’s offerings). Those looking for the ultimate Boss battle can challenge the Gigant: Take-Mikazuchi via the Highlander Assault Mode. The game’s Tutorial Mode is also par excellence, perfect for those who are just starting off.

Players tired with AI battles can challenge human opponents in Network Mode. This is also a cool way to show off your BlazBlue prowess, as you try to reach level 100 while tucking as many achievements as you can under your belt. The online play is very smooth, with 13 worlds available (2 of them are PS4-exclusive). You can even decorate your own “stage” via the My Room feature, where you can invite your friends to do battle. 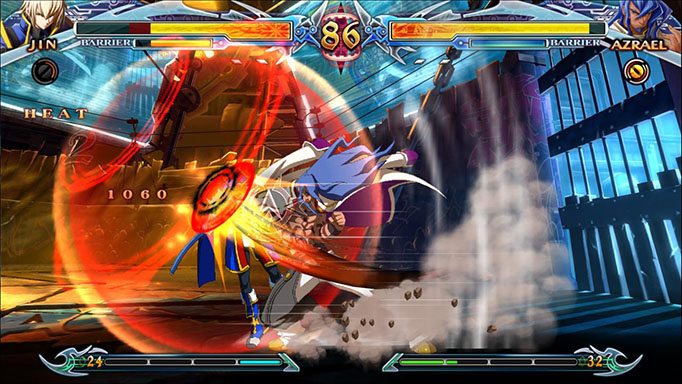 Fans and critics alike have praised Chrono Phantasma EXTEND as the best of the BlazBlue series. Solid fighting mechanics combine seamlessly with slick gameplay and a sterling storyline to produce one of the best representatives of the modern fighting-game genre. Whereas many of its peers simply thrive in new characters, bloodier battles, and tightly-squeezed extensions to its already convoluted storylines, BlazBlue delivers something refreshing and genuine to the table.

However, those who already have a copy of the original Chrono Phantasma release (and spent the requisite 100++ hours playing it) may not find too many incentives in getting this title. While a good distance away from being a mere rehash, it still is too similar to its predecessor. Even with expanded elements, EXTEND still does not bring too much progression for someone already invested in the original version.

That said, anyone who missed Chrono Phantasma due to any reason (from indecision to console unavailability) should get this chance to experience one of the best games in its bunch. Deeper than the frantic button mashing and flashy light shows of its peers, BlazBlue: Chrono Phantasma EXTEND delivers a competitive and satisfying experience that will leave you waiting for the next installment in the franchise — because, if past members of the series are any indication, you know it will only get better.