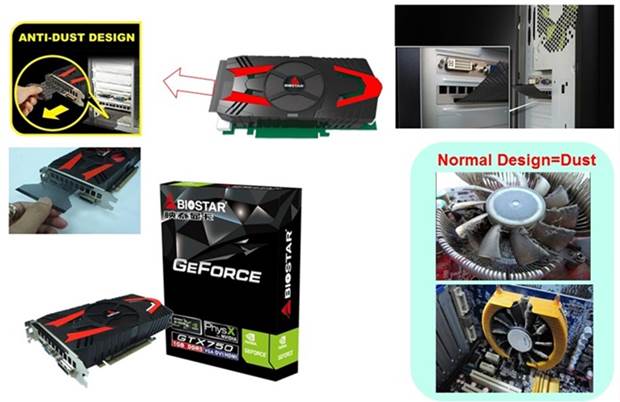 BIOSTAR has released the Flaship NVIDIA GeForce GTX750-based GPU, the VN7505XHG1 with a special design for the cooling fan, a unique Anti-Dust filter that can be removed and cleaned. Even with the most expensive and powerful computer components, one of the more mundane and annoying problems with computers is dust build up within the system from daily use. BIOSTAR has addressed that problem with the VN7505XHG1 by offering an easy way to keep the GPU fan clean and therefore running cool.

Coming with 1GB of GDDR5, at 128bit and a full sized PCB, the VN7505XHG1 supports the usual DVI/VGA/HDMI output with a max resolution of 2048 X [email protected]hz and uses the PCI Express 3.0×16 bus interface. This GPU also supports NVIDIA’s PuroVideo HD technology and as well as having total DirectX 11 support and support for NVIDIA’s PhyX and CUDA technologies.

The graphical power of the VN7505XHG1 combined with the smart fan filter will keep your system running cool and clean.

For more go to: http://www.biostar.com.tw/app/en/vga/introduction.php?S_ID=191