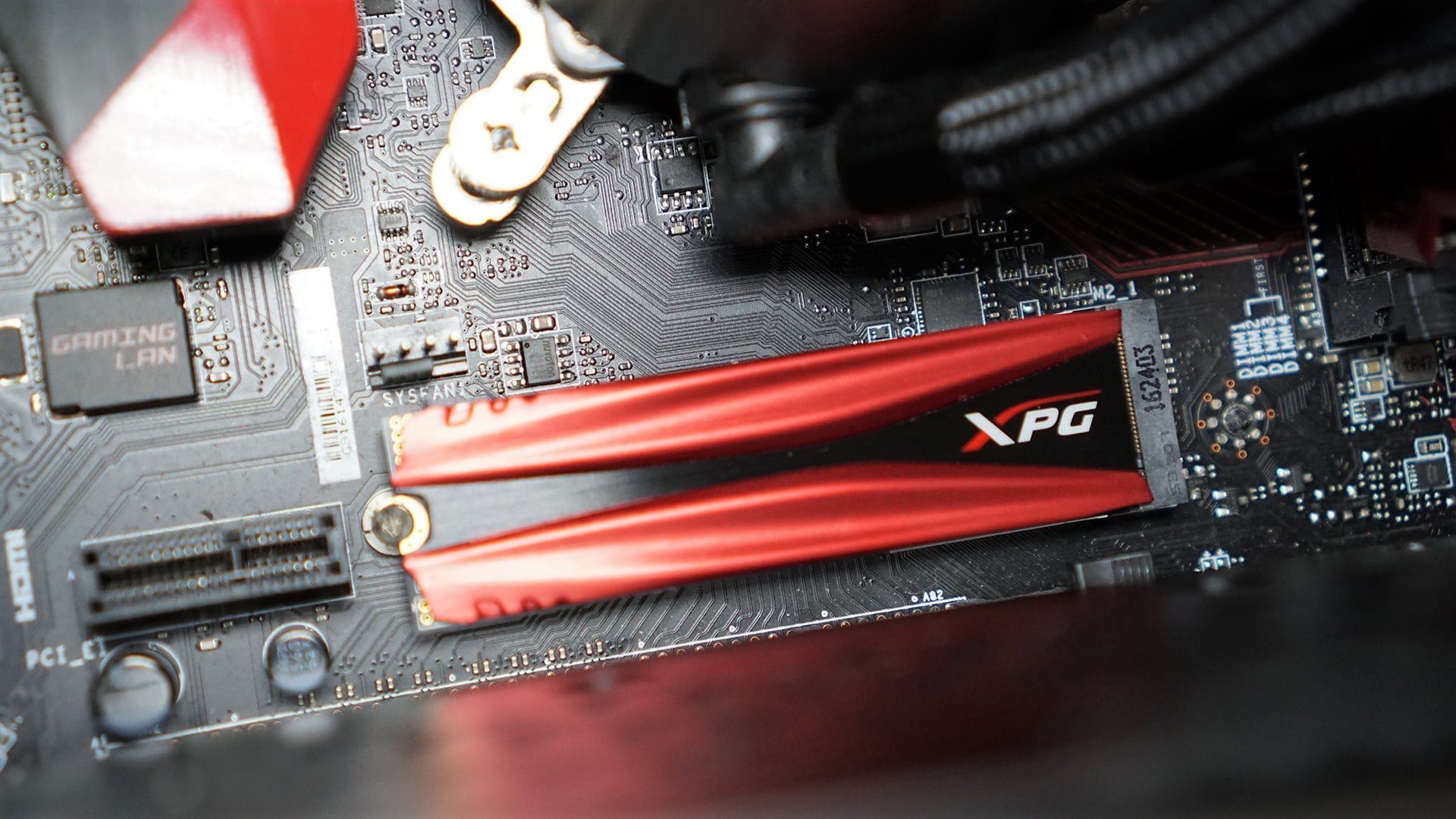 ADATA released the XPG GAMMIX S11 Pro M.2 SSD in 2018, which has a 5-year warranty and an MTBF rating of nearly 2 million hours.  The Gammix S11 has almost the same specifications as the SX8200 but varies in terms of price. The S11 comes with a heat spreader, a Silicon Motion SM2262 controller, RAID Engine, Data Shaping capabilities and Micron 2nd generation 3D TLC NAND. The GAMMIX S11 runs a bit cooler with the cool looking heatsink and hence performs better.

ADATA is even more serious in terms of performance as this SSD shows promising speed rate, even outmatching some top competitors products. It delivers up to 3200 MB/s at sequential reads and 1700MB/s at sequential writes which is praise-worthy. The 960GB variant tops out at 3,150MB/s. The average performance is around 310K for reading 4K data and nearly 280K for writing.

ADATA launched the XPG Gammix S11 Pro M.2 SSD in capacities of 240GB, 480GB, and 960GB. These SSDs offer a marginally less user addressable space than similar competitors of 256GB, 512GB, and 1TB types, but on the plus side, S11 delivers higher performance and endurance. The Gammix S11 is rated up to 310,000 or 280,000 random reads or writes IOPS for the top variant.

The S11 also boasts a surprising 640 TBW endurance rating that exceeds the competitors like Samsung 970 EVO. The 240GB and 480GB variants are priced the same as the model SX8200, but the 960GB version is cheaper by $70.

Some features of S11 include the Silicon Motion controller and Micron NAND, great looking and effective heatsink to handle thermal throttling, industry standard form factor and a 5-year Warranty.

The SSD Toolbox utility with the S11 is useful to monitor and optimize the drive. The interface is colorful and it can run quick and full diagnostics, set temperature levels and capacity alerts. It also has secure erase capabilities, system optimization capabilities which include adjusting settings for Superfetch, Prefetch, and automatic defragmentation abilities. The utility helps in setting the SSD for your operating system for peak performance very easily. The S11 supports Low-Density Parity Check (LDPC) error correcting technology, which can detect and fix a wider range of data errors. This results in more accurate data transfers and a longer SSD lifespan. The SSD drive also supports RAID Engine and Data Shaping that ensures data integrity and longer stability.

The XPG Gammix S11 Pro M.2 SSD uses a PCI-E Generation 3 x4 interface, which helps it reach the speeds of 3200MB/s for reading and 1700MB/s for writing while maintaining the 2280 M.2 form factor. The use of the second-generation 64-layer 3D NAND flash helps in achieving higher capacities, better longevity, and reliability.

The black and red colored heatsink can reduce the temperature by up to 10°C. This helps in maintaining peak performance during taxing read and write tasks. The SLC Caching and LDPC ECC technologies of S11 ensures perfect functioning in the background. The heatsink prevents any throttling due to extreme thermal conditions. The fan noise is low and keeps the drive cool at all times. The heatsink is made of aluminum with a plastic shroud. It also includes three RGB LEDs under the shroud and is compatible with RGB lighting control apps from various motherboard manufacturers.

The S11 differs from the S10 in both the controller and the NAND. The Gammix S11 uses the brand-new Silicon Motion SM2262 controller paired with second generation 64-layer Micron 3D TLC NAND, which improves performance significantly higher than SM2260 based models like Gammix S10, XPG SX7000 or SX8000. The NVMe protocol has been upgraded from 1.2 to 1.3.

The Adata S11 SSD was put to test using Crystal Disk Mark (CDM), in which the S11 performed exceptionally well for reading tests and proved to be the fastest drive tested with an average of 3179 MB/s with high queue depths, and in the middle of the list for the lower queue depths. 4K reads again outperformed the pack by a fair margin.

For the write tests, the S11 came second in the high queue depth and in the middle of the list for lower queue depth. The 4K write tests were performed formidably, settling in above the average in the list.

The ADATA Gammix S11 managed to score higher than all similar drives and even SX8200 in terms of access speed.

In ATTO tests, the Gammix S11 outperformed the SX8200 and the Patriot Hellfire by a decent margin in reading speeds. It scored a bit less to the Hellfire in terms of writing speeds. For the Anvil Storage Utility test, the S11 scored highest among all competitors.

The Quarch XLC Programmable Power Module is used to understand the power characteristics of SSDs. Idle power consumption is an important aspect if you are looking for a new SSD drive for your laptop. The Gammix S11 averaged these tests at around 3.81W and a maximum of 6.25W during heavy file transfer test. This translates to around 88MB/s per watt, which is similar to the Samsung 970 EVO. The S11 consumed around 0.763W with ASPM disabled and dropped to just 58mW after enabling the feature.

The Adata XPG Gammix S11 delivers phenomenal performance and is better than many competitors. It has more endurance than the Samsung 970 EVO, a trendy heatsink, and competitive pricing. The SSD drive performs really well and comes with a 5-year warranty. It is one of the fastest drives when put through various tests. It landed in the top area of most of the comparison tests. All the features make it highly recommendable and the best value for price in the market.

XPG GAMMIX S11 Pro M.2 SSD Review
Conclusion
The Adata XPG Gammix S11 delivers phenomenal performance and is better than many competitors. It has more endurance than the Samsung 970 EVO, a trendy heatsink, and competitive pricing.
Positive
Best value in the market
Negative
4
GAMEHAUNT SCORE
Where to Buy
Amazon