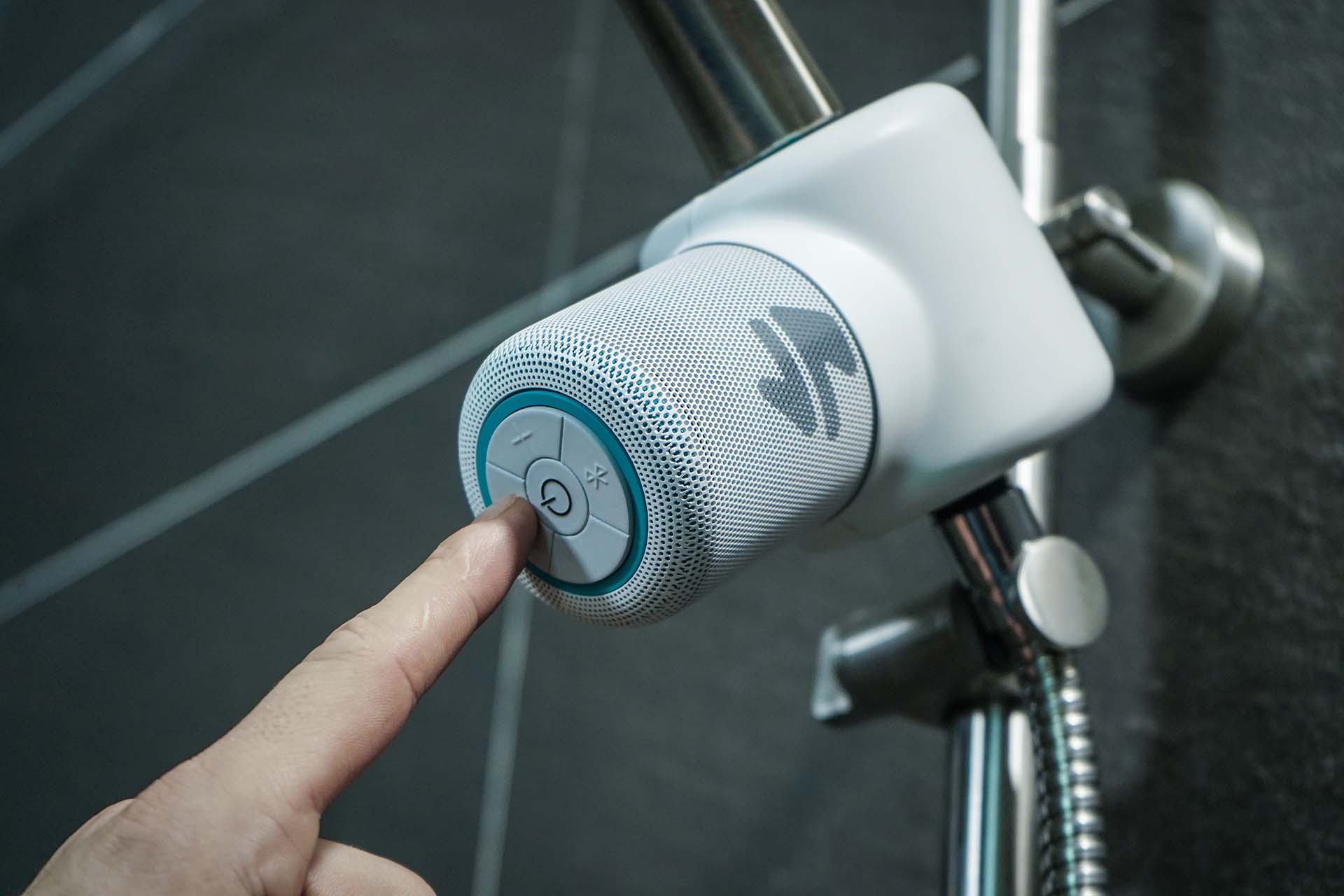 Today, Ampere debuts Shower Power, the hydropower shower speaker and a CES® 2021 Innovation Awards Honoree. Made to fit with any showerhead, its revolutionary patent-pending design uses the water flow from your shower to power it up. Always charged and always there, Shower Power syncs with any Bluetooth-enabled device so you’ll be able to listen to your favorite music, podcasts or audiobooks in the shower.

Shower Power is Ampere’s fourth Kickstarter. Known for their family of wireless chargers and accessories — including Cell, Side Pocket and the highly acclaimed Unravel — the team have partnered with audio experts, who have worked with brands such as Monster and Braven, to bring this speaker to life.

A Sustainable Solution to Music in the Shower

The secret sauce to Shower Power is its proprietary hydropower system. When installed with your showerhead, the flow of water spins an internal impeller inside Shower Power, which is connected to a mini generator that charges up the battery inside. The speaker automatically turns on when the water is turned on and stores enough power to keep playing after your shower is over too. With the water running, Shower Power always generates enough power to play and charge the battery at the same time. With a fully charged battery, Shower Power boasts over 20 hours of listening time with the shower off.

To complete the sound ecosystem in the bathroom, Ampere has also designed Droplet, a mini waterproof speaker that can pair with Shower Power. The additional mini speaker has been designed to round out the sound in the bathroom or just act as a portable travel speaker that can be taken anywhere. This week, Ampere also announced that they will be releasing a LED light edition of the speaker called Shower Power Shine. This LED version will bring a fantastic light show to the shower speaker and the lights will sync with the audio too.

As well as using renewable energy, Shower Power is also made from 100% recycled ocean plastic. The use of recycled materials in its construction greatly reduces its environmental footprint and clears out some of that pesky plastic from our oceans.

in all directions and delivers immersive, stereophonic audio. You can also play, pause and skip tracks directly on the speaker with the push of button. But if your showerhead is just a little out of reach, Shower Power also comes with a waterproof remote control, so you can take charge of your speaker mid-shampoo rinse.

“While we’ve been developing this idea for more than two years now, we couldn’t think of a better time to launch it” says Reid Covington, CEO, Ampere. “After a quarantine-fueled year, we’re consuming more content on our speakers — like podcasts, audiobooks and music — than ever before. And on top of that, we’re spending even more time at home because of the pandemic. We think that it will be a great fit for audiophiles or avid podcast listeners.”

Shower Power measures just three inches by two inches and weighs around one pound. It’s available with a range of accessories, including a mini waterproof speaker that pairs directly with Shower Power so you can build better sound throughout your bathroom. It also comes in three colorways — crisp white, matte black and chrome — to match any bathroom style and installs in less than one minute with any showerhead.

Shower Power was first launched on Kickstarter on October 28, 2020. It is now available for pre-order on Indiegogo and will begin shipping in Q1, 2020. Shower Power was the fourth Kickstarter project from the Ampere team. Unravel was the most crowdfunded wireless charger in 2019 and the team have raised more than $1.5 million across their previous campaigns.