Guild of Wars 2: Path of Fire is another great expansion from the ArenaNet that takes into an exciting journey into the Kingdom Elona in your quest for your battle with Balthazar, the God of War. If you think the Crystal Desert is a boring experience based on your previous experience with Guild of Wars 2, then think again. ArenaNet has redesigned what was once to be a traumatizing experience wading through the Crystal desert into a much more fun-filled and exciting journey with beautiful sand all around, amazing oasis and many cities scattered throughout the desert.

One of the most talked about features about this expansion is about the mounts, which has been added to the Guild Wars 2 after thousands of requests by the fans. The mounts are well placed within the game and you can gain almost 4 mounts as you move along your quest ad there is also a fifth mount waiting for you that needs to be obtained with the help of other means. The various mount types include The Raptor, Springer, Skimmer and jackal and each mount have their own skills and abilities. 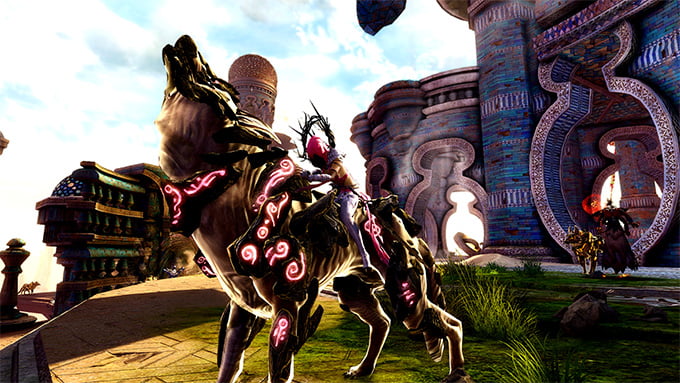 Mounts are the most important assets in this expansion as you spend all your experience earned in the journey on buying them. They help you to reach far distances quickly, help you to jump great heights and also enable you to cross through tough areas. Without the help of mounts, you can’t reach certain areas and only after getting the mounts you may tend to revisit the areas and fetch the collectibles that can’t be seen before. When you go through the higher levels, you may also require using multiple mounts to do certain tasks. So it is important to make use of the mounts cleverly.

The plot is no different than any other game as the good guy takes on the evil guy. In the Path of Fire expansion also the hero and the savior is sent to the Crystal Desert to fight against the Balthazar, the god of war and his crazy army. The main duty of the hero is to stop Balthazar from killing Kralkatorrik, an elder crystal dragon to absorb all its magical powers. It is certainly a follow-up of the plot from the original version and the Nightfall expansion with some added twists and turns. You could also come to see some previous characters come to life here and their stories still continue here too. Even if you are new to Guild Wars 2, it is pretty easy to follow up with the plot. But if you have any experience playing the previous versions, then you can link the characters with their skills, understand the environment lot easier as Guild Wars 2 has an evolving story and people having played the game may find it even more amazing with character references and new areas to explore that was not possible in earlier versions.

The plot has been woven nicely with a lot of missions and the levels are paced perfectly. The ultimate part of the game is obviously the end with an exceptional climax and setting up a perfect start for the next version, Living World season. Meta events return with this expansion, but sometimes you may need to stop at the current task and take care of the meta event. All the professionals in this expansion have come up with some added skills, including the Ranger could be using a dagger and the Elementalist getting access to swords etc. 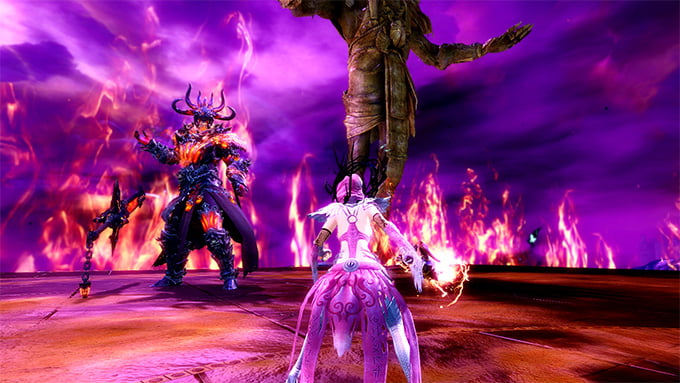 The gameplay is pretty much exciting with a well-defined plot as you have lots to do on this expansion. The areas to explore is massive with lots of missions and achievements to unlock throughout the game. Even though some may feel that the addition of dungeons and raids could have added more excitement to the game, there’s a lot of things to do that you may almost forget them. But what sets apart the Path of fire expansion from the previous versions is the excitement achieved in exploring new areas and the journey coming across new characters and enemies.

The expansion also has varied locales to keep you excited at all times and tempt you to explore all the areas in the game. Navigation is also a lot easier with the introduction of mounts as you can reach anywhere quickly and cross troublesome areas with the added abilities of these mounts. The five mounts that you tend to collect throughout the game, keeps your excitement level at the same and it goes a notch up and when you add a new mount to your arsenal and experience the magical powers and skills of these mounts. 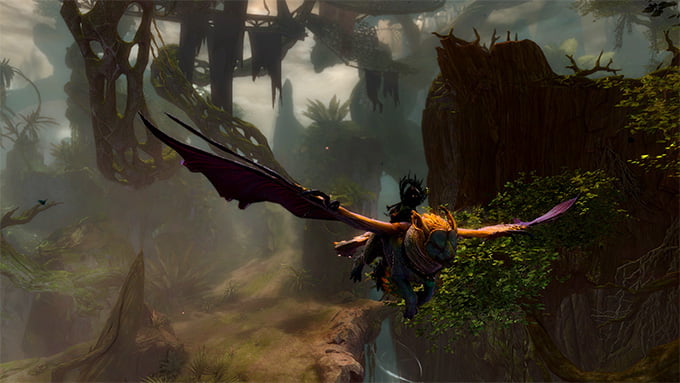 Overall, Guild of Wars 2: Path of Fire expansion is an excellent comeback from ArenaNet after they released the Guild Wars 2 almost 5 years back. The game is back with a bang and it has certainly provided a lot of entertainment for Guild Wars enthusiasts to talk about all the new characters, new areas and the innovations made in this expansion. The addition of mounts has been a welcome feature in this expansion which has satisfied a lot of gamers. The plot is well written and entertaining and also emotional at times, but the real winner is the varied environments that are exceptionally beautiful and carefully designed. And finally we can conclude that the Path of Fire expansion is certainly the best part of the Guild of War series and ArenaNet adds one more gem onto their crown.